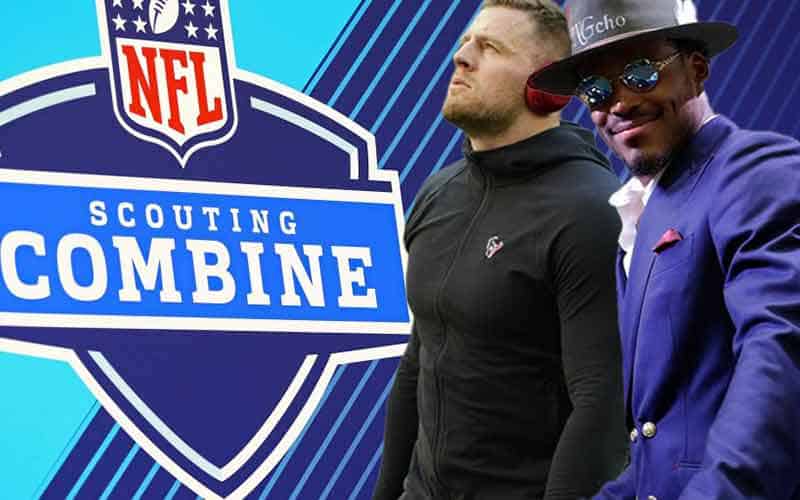 Planning for the following season in the NFL does not start when the Super Bowl ends for most teams. The process begins as soon as each franchise no longer has games remaining on the schedule, and for some, that occurs in early January.

The two teams that compete in the Super Bowl each year are at a disadvantage and have less time to prepare than the other 30 franchises.

NFL betting sites are on the same page with the league and don’t focus on the following season until a Super Bowl Champion has been declared.

The past two NFL offseasons have been different, as big-name free agents have flooded the market at a higher rate than usual, with former league MVPs up for grabs to the highest bidder.

The NFL scouting combine is scheduled to begin tomorrow, but pro football talent evaluators already have two highly recognizable veterans on the board to choose from – defensive end J.J. Watt and quarterback Cam Newton.

Oddsmakers have now laid out odds on which teams that Newton and Watt will end on for the 2021-22 NFL Season.

J.J. Watt has been plagued with injuries that have forced him to miss significant time over the past few years. His inability to remain on the field combined with his high price tag has forced the Houston Texans to move on and release Watt, and now he is reportedly taking some time to evaluate his career before entertaining any offers.

Several teams have already expressed interest in attaining Watt’s rights and the above NFL prop bet implies that the Cleveland Browns are the most most likely franchise to sign him with +175 odds.

Coming in third are the Pittsburgh Steelers, and although they may not have the salary-cap space to make the move happen, the team could be willing to renegotiate the contracts of current players to create room for Watt. T.J. Watt, J.J.’s brother, is already a member of the Steelers and is likely in head coach Mike Tomlin’s ear about it.

Although Newton and the New England Patriots experienced limited success during the 2020-21 NFL season, he did manage to silence skeptics who thought his career was over from a physical performance perspective.

Despite Cam’s successful return to the field following injury, he is uncertain as to whether or not he will return for another season, be it with the New England Patriots, or any other team.

NFL sportsbooks are not predicting a return to New England, as they have not included them as an option in the above Cam Newton betting odds. The leading option is the Baltimore Ravens with +300 odds, meaning that each $1 wager on Cam has the potential to earn $3 if he signs with them.

There is no indication that Newton will join a team as a backup, and with Lamar Jackson firmly entrenched into the starting quarterback role, it is unlikely that he will adorn a Ravens uniform in 2021.

The NFL Draft odds almost unanimously imply that the Jacksonville Jaguars will select Clemson QB Trevor Lawrence with the #1 overall pick in April, and Newton might be intrigued by the chance to mentor him for a year or two.

The New York Jets and the Denver Broncos are the franchises that need quarterback help the most in 2021, but teams will almost certainly wait until a post-Draft roster evaluation before extending a contract offer to Newton.

Getting in on Cam’s money line odds for the Jets or Broncos will award bettors between 6-8 times the amount risked, so don’t delay because he could sign at any moment.