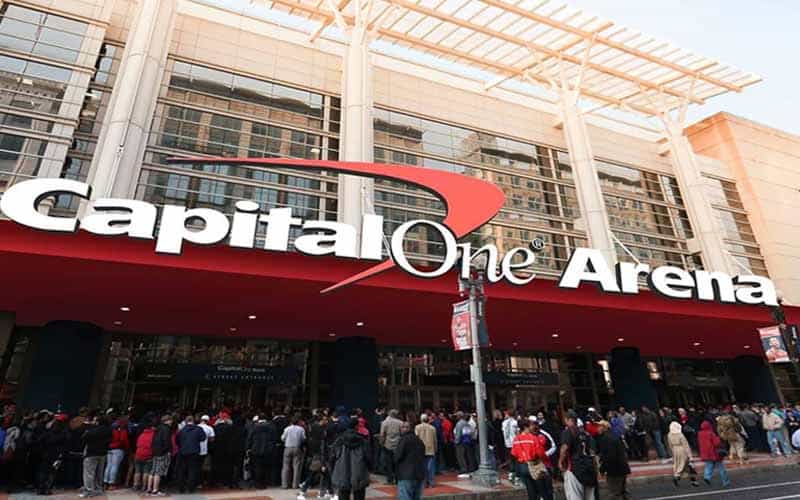 Get ready, sports fans in the nation’s capital: One of your arenas is about to make sports betting history in the United States.

Washington DC’s Capital One Arena will soon have a sportsbook inside the arena after Monumental Sports & Entertainment—the company that owns three of the District’s professional sports franchises—announced a partnership with William Hill in a press release on Thursday.

Sportsbooks and betting parlors are commonplace in stadiums and arenas located in other parts of the world—such as the United Kingdom—but the Monumental-William Hill partnership will make Capital One Arena the home of the first sportsbook to be physically located inside a professional sports venue in the United States.

A terrific day to #BeMonumental as @MSE and @WilliamHillUS marked the start of an unprecedented sports betting partnership! pic.twitter.com/lCUGn91dJu

Monumental CEO Ted Leonsis said in the company’s press release that he was thrilled to partner with William Hill to make history in the newly legalized market.

“Monumental is dedicated to bringing the latest technology and innovation into our arena and delivering extraordinary experiences to our fans,” Leonsis said. “We are excited to partner with William Hill, the industry leader in sports betting, to become the first professional sports arena in the US to feature a sportsbook.”

The CEO went on to say: “Through this partnership, we are thrilled to enhance the fan experience with innovative gaming opportunities and transformational dining and culinary options not just on event days, but year-round. Our partnership with William Hill compliments our vision of making our arena the premier sports and entertainment destination in Washington DC.”

Leonsis told the Washington Post on Thursday that he wants the sportsbook to appeal to a younger generation who’s become accustomed to having technology as a part of their everyday lives.

“Think of it as less of a cocktail lounge and more of a modern sports bar and trading desk,” Leonsis said. “We want it to feel like the best Apple store with the genius bar because young people are accustomed to that.”

Leonsis said that he got the idea to put a sportsbook in the Capital One Arena when the family took a trip to visit his daughter in London five years ago.

While on a family outing in Scotland, he saw the locals frequently visiting a betting parlor and the passion the entire town had for it.

And that local betting parlor was owned by none other than William Hill.

“I joked it’s kind of like Starbucks there. … It’s everywhere,” Leonsis said, recalling his experience overseas. “I would walk in and see young people, business people, mothers, sports fanatics, and soccer fanatics.”

Leonsis was featured in a special on the Washington Post Youtube channel last year, where he predicts how he thinks the future of the newly legalized sports betting market in the US will unfold.

William Hill first arrived in Nevada back in 2012, and today, the British bookmaker operates in 10 states and says it accepts one out of every four wagers legally placed in the US.

Joe Asher, the chief executive of William Hill US, said he believes the partnership will Monumental will set a new standard for sports betting in the country.

“This sportsbook will be a flagship venue for the industry and will serve the sports fans of the Washington DC area unlike any other,” Asher said in the press release. “Partnering with Ted Leonsis and the entire Monumental team was ideal. They share our vision and principles for bringing innovative sports betting opportunities to fans in a responsible way. This deal sets a new benchmark for how the industry will serve fans and how fans engage in sports.”

It’s currently not known when the William Hill sportsbook will be ready to accept wagers from inside the arena, but Asher said he’s betting it will open next year.

“I don’t really have a good feel for how long that might take,” Asher told The New York Times. “You would bet on sometime in 2020. We’ll let the regulatory process play out.”

It’s now been nearly 17 months since the US Supreme Court lifted the federal prohibition on sports betting, and today, 13 states now offer at least one form of legal sports betting—whether it be in-person, online, or via mobile apps.

Legalized sports betting in the District will soon become a reality after the DC Council passed legislation late last year, and Mayor Muriel Bowser signed the city’s bill into law in February.

The DC Lottery, which is authorized to establish regulations and approve potential operators, said it expects to start issuing sportsbook licenses to eligible local bars, restaurants, and other related businesses sometime this month.

Other sports venues located in the city limits are also allowed to apply for a sports betting operator’s license.

However, there are two hurdles that the Monumental-William Hill sports betting partnership will have to overcome.

The first obstacle is whether William Hill will be allowed to offer its mobile app for sports betting inside Capital One Arena. A local app developer is currently suing the city over the $215 million no-bid contract with Intralot and a full hearing—and potentially a decision on the lawsuit—is scheduled to take place on Friday, October 18.

While the lawsuit does not affect in-person sports wagering—and would likely not impact the brick-and-mortar operations at the arena—the civil case’s outcome could determine whether the DC Council will be forced to go back to the drawing board to allow a competitive bidding process to be the DC Lottery’s city-wide online and mobile sports betting provider.

Another potential issue that may arise has to do with the Georgetown Hoyas college basketball team playing games at the Capital One Arena.

The NCAA has a long history of being strongly opposed to any and all forms of sports betting on its collegiate athletes and events and could potentially challenge the legality of the issue in an attempt to shut down the arena’s sportsbook when the Hoyas play home games.

While the future of DC legalized market—and the Capital One Arena sportsbook—is uncertain, you can bet that this won’t be the last time we’ll see the nation’s capital make sports betting history in the US.