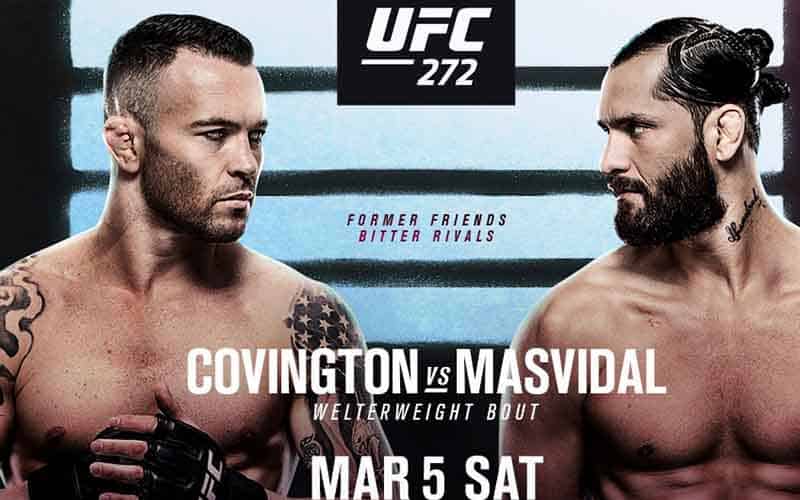 Both Jorge Masvidal and Colby Covington are coming off of a loss in their last UFC match and are in need of a win to climb the welterweight ranks and challenge for the championship once again.

MMA odds are on the boards at UFC betting sites that suggest the lesser-experienced Covington is an overwhelming favorite as he is ahead of Masival in the moneyline by 615 points.

Covington vs. Masvidal Odds To Win

Masvidal is the much more experienced fighter, competing in 50 total MMA matches compared to Covington’s 19, despite only being 3 years older.

The above comparison reveals the potential for an even match that could lead to a judges’ decision to declare the winner, but what do the UFC prop bets suggest in regard to the ultimate outcome?

Will Covington vs. Masvidal Go The Distance?

The above MMA prop bet is interesting in that the odds for the fight ending early are coming in at even money. Half of Covington’s wins have come as a result of a decision, so the high potential for a finish within regulation plays into Masvidal’s hands as he has a higher percentage of knockout victories.

Both fighters are strikers and a majority of the bout is expected to feature toe-to-toe combat as opposed to being a grapple-fest. If the fight does go to the ground, Covington has the greater proficiency in submission techniques, but Masvidal is the more experienced defender.

UFC round betting options favor a result where Convington wins on points, with odds for alternative methods of victory suggesting that Masvidal getting knocked out is the next most likely outcome.

Pretty much any angle taken for betting on UFC outcomes that are other than Colby Covington winning via judges’ decision will result in double or more net payouts.

For instance, there are currently +210 moneyline odds on the boards for a Covington win by any other method than a decision and will deliver $2.10 for every dollar risked out that outcome if it happens.

The top online sportsbooks are paying out even higher if the decision for Covington is not unanimous. +510 UFC odds for any in-fight Covington victory will reward brave online MMA gamblers handsomely, but only if you lay some action before these moneylines change.

The winner is hopeful for a chance to challenge incumbent UFC Welterweight Champion Kamaru Usman who has held the title for three years as of yesterday.

The MMA wagering opportunities return next weekend with UFC Fight Night betting as Thiago Santos and Magomed Ankalaev will battle alongside a stacked card on March 12th.

Ankalaev is a massive favorite to win but equally massive payouts can be earned by betting on Santos. UFC Fight Night odds will remain on the boards for the next 9 days but the UFC 272 lines will expire within 56 hours.