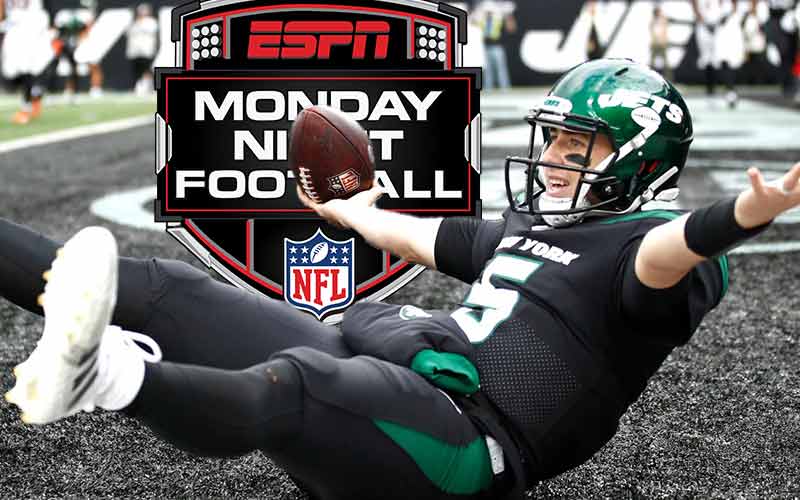 Two former AFC East rivals meet this evening on Thursday Night Football in a game that has the potential to be closely contested. However, that’s not reflected in the current NFL odds as lines for TNF suggest that the Indianapolis Colts will win at home over the New York Jets by 10 or more points.

The Jets will be without rookie starting quarterback Zack Wilson for the second game in a row when they suit up tonight, but last weekend’s performance by Mike White has their fans hopeful for similar results.

Have a look at big Mike’s stat line from Week 8 where they bested the then #1 seed in the AFC Cincinnati Bengals.

Mike White Statistics vs. The Cincinnati Bengals In Week 8

While the interceptions do need to be reduced if the Jets are going to have a shot at beating the Indianapolis Colts on Thursday Night Football, his completion ratio of 82% is giving fans in New York

“It’s funny, my very first college start was on Halloween on a Thursday night in Houston. Then my first NFL start was on Halloween, so that was pretty cool… [we] just have to stick to the script that the coaches laid out for us, trust the plan and trust our process that our coaches are putting us forward and just have complete faith in it.”

Legal online NFL sportsbooks are not buying into the Jets settling into a norm of consistent, high-level production, implying that the Colts should easily handle New York. The moneyline of -535 offered on the Colts converts to an intrinsic probability of 85% for an Indianapolis win.

While not mathematically eliminated from becoming the AFC South Division champions just yet, the Colts’ heartbreaking overtime loss to the Tennessee Titans in Week 8 has placed them in a 3-game hole with and an early disadvantage in the head-to-head standings.

Indianapolis is playing better as of late, and their NFL moneyline odds for Thursday Night Football are proof of that. This acknowledgment from the bookies is not improving their overall outlook in the football futures, likely because they’ll be battling for one of the AFC’s three wild card spots.

As of this writing, the Colts are the AFC’s 12th overall team. The NFL Playoff picture bracket based on the current odds agrees with the current reality, as Indianapolis is not among the potential postseason qualifying franchises.

The futures odds also place Indianapolis among the bottom of the barrel in the AFC, granting them a +3000 moneyline which suggests that they are superior to only the Miami Dolphins, Denver Broncos, Houston Texans, Jacksonville Jaguars, and the Jets who they play tonight.

If the Colts are going to turn their season around, it’ll need to begin with a win tonight against New York so that their record can rise to 4-5, keeping them alive in the playoff hunt.

Do the Jets have a shot a getting it done? The arm of Mike White will dictate much of their success, or lack thereof, tonight. Believe it or not,  New York can continue to cling to their slim playoff hopes with a win in Indy, so why not let big Mike sling forty or so darts and see what happens?