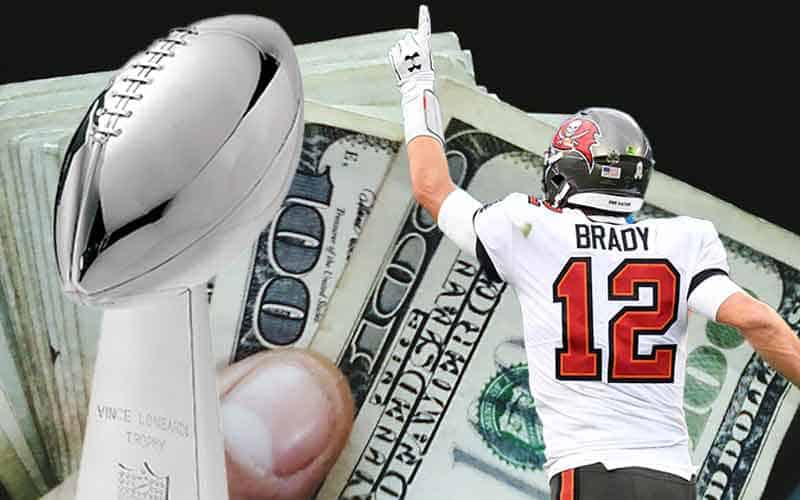 The opening Super Bowl 55 betting lines debuted with a point spread favoring the Kansas City Chiefs by either 3 or 3.5 points, depending on where you looked.

Considering the way the Tampa Bay Buccaneers have been playing as of late, it was expected that the spread would shrink by Super Bowl Sunday, but that hasn’t happened, despite NFL sportsbooks taking in several very large bets thus far.

The Buccaneers have won three road playoff games in a row on their way to Super Bowl LV, and now they’re the first team in NFL history to attempt to win a Lombardi Trophy in their home stadium.

Tampa Bay has overcome two 3-point spreads on the road in as many games, but now they are 3.5 point dogs at Raymond James Stadium to the visiting Chiefs.

Domestic sportsbook giant, BetMGM, is reporting that a $2.3 million wager has been placed on Tom Brady and the Bucs to cover the +3.5 points that they are predicted to lose by.

That means the Buccaneers will need to lose Super Bowl LV by a field goal or less in order for the massive bet to cash in. This incredibly risky, multi-million dollar wager will earn $2 million if Tampa Bay loses by 3 or less.

The differential is caused by the vigorish that BetMGM includes in the wager, which is the cut that sportsbooks take off the top of bets in order for operations to be profitable. Because sports betting odds are designed for accuracy, oftentimes, the action comes in evenly on both sides. In fact, that’s the goal.

Therefore, in order for sportsbooks to be profitable, they must take a little juice off of the top of each sports wager.

BetMGM is also reporting several big-money bets coming in for the Chiefs that are north of six-figures.

The domestic sportsbook stated that 80% of the action coming in was being laid on Kansas City, so the large bet on Tampa Bay was a welcome relief.

Now, BetMGM doesn’t have to play favorites as the massive bet on Tampa Bay has balanced out the spread without requiring the line to budge.

Ultimately, it is the goal of oddsmakers to set an accurate spread that will draw even action on both sides. The projections that are made include the potential for seismic bets and it appears that BetMGM was correct in holding the line steady despite the overabundance of action coming in for KC.

That’s why it is key for sportsbooks to offer several different types of NFL betting options for the Super Bowl. Lumping the entire payload into the point spread is too dicey, and when hundreds of millions of dollars are on the line, minimizing risk is the name of the game.