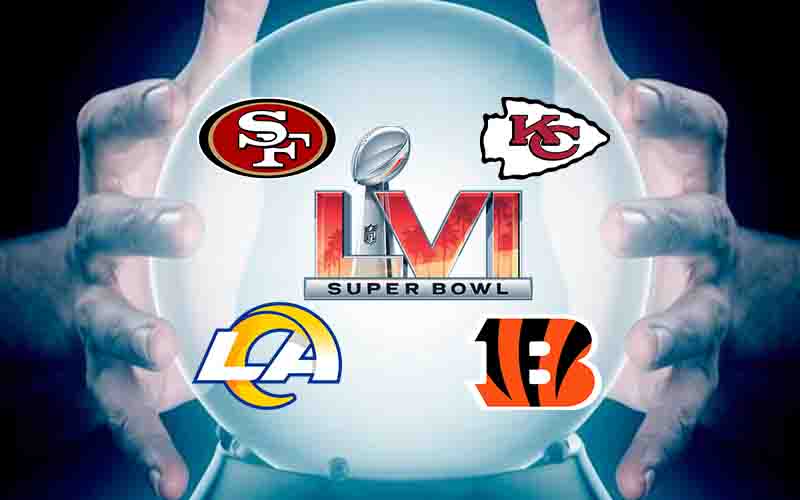 Online sportsbooks are always trying to get an edge on upcoming events, finding new angles to produce betting odds that will intrigue customers.

Betting on the NFL Playoffs is no longer limited to existing matchups as the following four Super Bowl lines project all possible championship pairings and are allowing wagers to be placed on them now.

Another interesting element of these prospective NFL odds is that one of them will actually become the Super Bowl 56 betting line on Sunday night, while the other three will disappear once the AFC and NFC Champions are decided.

Let’s have a look at each potential combo on the table for betting on Super Bowl 56.

While the Rams are favored in the NFC Championship Game, the Bengals are underdogs to the Chiefs and are expected to lose by a touchdown. If Cincinnati is able to topple the mighty Chiefs and move on to Super Bowl LVI, it appears they’ll be underdogs once again in what would be a home game for the Rams at SoFi Stadium.

The Rams vs. Cheifs is the most likely Super Bowl matchup according to the oddsmakers, but don’t let that scare you off of any of these other betting lines because three out of four games were upsets last weekend.

Even in the case where the home team won, the Chiefs were taken to overtime by the Buffalo Bills and should have lost as well. Home field advantage seems to mean less than it ever did this postseason, and the above line indicates that the Chiefs will be favored by a field goal in the Rams’ house.

If the 49ers win, no matter who they end up playing from the AFC, it will be a matchup of a prior Super Bowl. If Cincinnati and San Francisco meet in SB LVI, it will be a rematch of Super Bowl XVI and XXIII.

Just like in their prior two Super Bowl meetings, the 49ers will be favored to win, and the atmosphere will resemble a home game for the 49ers as their fans have routinely packed SoFi stadium.

The above Chiefs 49ers betting line is allowing action on a potential rematch of Super Bowl LIV from two years ago where KC defeated San Francisco after a late rally by Patrick Mahomes.

KC once again gets the early edge, which should come as no surprise as they also top the Super Bowl futures now that the Green Bay Packers have been eliminated. Many online gamblers are now betting on the Kansas City Chiefs to win it all because with Tom Brady and Aaron Rodgers out of the playoffs, they seem to have a clear path to championship glory.