Dead in the water odds: Could the Miami Dolphins go 0-16? 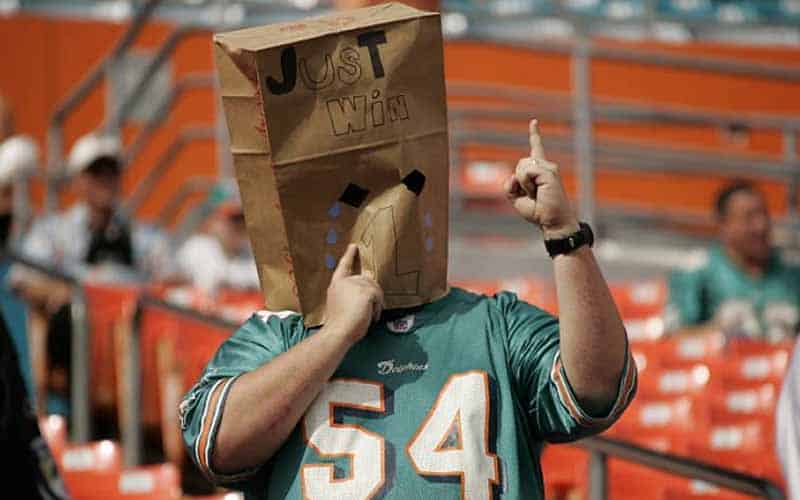 The Miami Dolphins hold the distinction of being the only NFL team to ever go undefeated and win the Super Bowl, finishing the 1972 season 14-0 before beating the Washington Redskins in Super Bowl VII.

However, in 2019, the Dolphins could become the sixth team to ever go winless in an NFL season and only the third overall to go 0-16.

Currently sitting at 0-5 with little hope remaining this season, oddsmakers still give the Dolphins a chance to save face and win a game this year.

BetOnline lists the chances of winning at least once at -300 odds while an 0-16 season is the underdog at +200.

Will the Dolphins go 0-16 this season?

Miami started this season off with consecutive blowouts, losing to the Baltimore Ravens 59-10 before dropping to the New England Patriots 43-0. After that, Miami lost to the Dallas Cowboys 31-6 and the Los Angeles Chargers 30-10.

This past Sunday, the Dolphins only lost by a single point to Washington 17-16, proving that a win is possible. Even at 0-5, the Dolphins still have a chance to finish with a respectable record.

This is not to say that the Dolphins have a shot at winning it all with their current Super Bowl odds, of course. Because they definitely do not.

BetOnline gives Miami +500000 odds ($100 bet wins $500,000) of lifting the Lombardi Trophy at the end of this season, the last place spot they share with the 0-6 Bengals. Ironically enough, the NFL betting odds give AFC East rival New England the best shot at winning Super Bowl LIV.