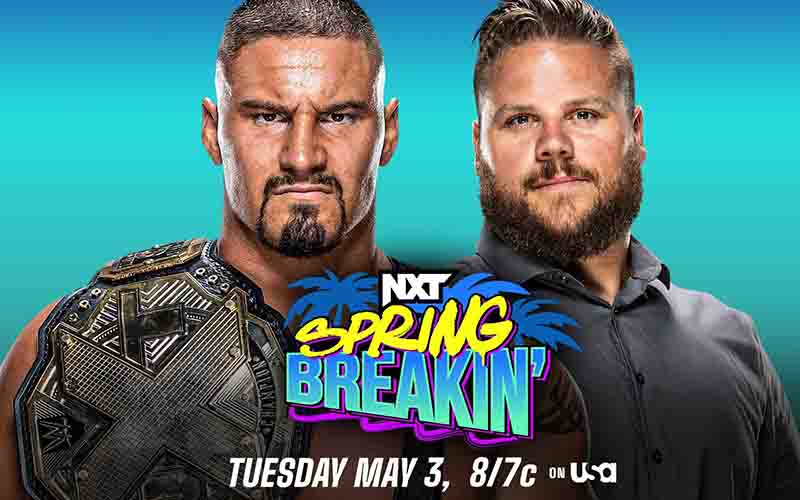 NXT Spring Breakin’ will air tomorrow night on USA at 8 PM and features the following entertainment prop bets for each match on the card.

It is now safe for those within the WWE Universe to refer to Bron Breakker as the son of Rick Steiner now that he’s inducted his father and uncle into the WWE Hall of Fame.

What’s also safe are assumptions that Breakker will defeat Joe Gacy tomorrow night and retain his NXT Heavyweight Championship Belt as $9 bets will be required to net $1 on Bron winning the match.

However, online WWE bettors must consider the potential of a Gacy win due to the booking irregularity that’s been exhibited since NXT’s conversion to 2.0 status.

A $1 bet on Gacy to beat Breakker will net $5 to brave pro wrestling gamblers, but only if his +500 moneyline is locked in right now.

This Sunday, May 8th at 8 PM on the WWE Network via Peacock, NBC’s streaming platform, Backlash 2022 begins with the following matches scheduled to occur.

Highlighting the WWE Backlash odds at entertainment betting sites is the following line for this WrestleMania rematch between Charlotte Flair and former UFC Champion Ronda Rousey.

Charlotte was able to fend off Rousey in the first go-round back at ‘Mania on April 2nd, but the odds overwhelmingly suggest that Ronda will capture the Smackdown Women’s Championship on Sunday evening.

Entertainment gamblers that are expecting a swerve should go ahead and lay some action on Charlotte Flair’s odds and earn $3.50 on each dollar wagered on her +350 chances of besting Ronda Rousey.

The American Nightmare continues his return run with the WWE with another WrestleMania rematch against Seth “Freakin'” Rollins. This time, the same result is projected by pro wrestling oddsmakers as Cody Rhodes is getting -350 odds to win this Sunday at Backlash.

The remaining card has been granted the following entertainment betting lines.

2022 WWE Backlash will be the last major event on the pro wrestling PPV calendar until AEW’s Double Or Nothing which is scheduled to go down on May 29th – Memorial Day Weekend.