NFL To “Appeal” Its Own Suspension Of Deshaun Watson 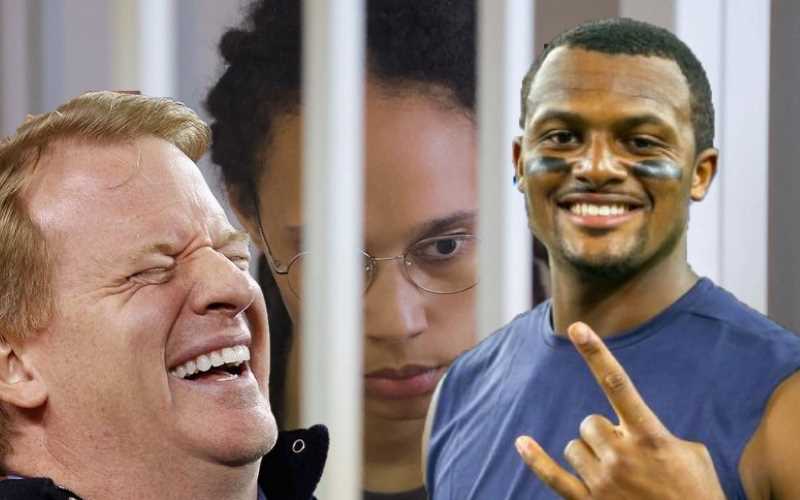 As the 2022 NFL preseason officially begins with tonight’s Hall of Fame Game, the league is dealing with another scandal.

Actually, it’s the same scandal it’s been dealing with for the last year and change, but the thing just isn’t going away.

After new Cleveland Browns quarterback Deshaun Watson was hit with a pathetically lax six-game suspension for sexually assaulting every massage therapist in Texas (“allegedly”), there was a significant outrage and pushback from both the mainstream sports media and NFL fandom.

But what did they really expect?

If you really want to be outraged (as if you needed any extra motivation), consider the case of Falcons Receiver Calvin Ridley.

Ridley is serving an indefinite suspension – which will last a minimum of one entire NFL season – for betting on football in late 2021 while away from the team for personal reasons.

Roger Goodell – the most incompetent league commissioner in the history of sportsball (seriously, this clown must have huge dirt on every NFL owner at this point) – justifies it this way in a letter to Ridley:

“Your actions put the integrity of the game at risk, threatened to damage public confidence in professional football, and potentially undermined the reputations of your fellow players throughout the NFL.”

Bear in mind that Ridley’s paltry wagers amounted to $1500 or so and had zero impact in any game whatsoever.

Bear also in mind that the NFL is the official sports betting partner of FOX Bet, BetMGM, PointsBet, WynnBET, and a host of other sportsbook operators.

As a response to Watson’s tiny suspension, the Browns – which had heavily backloaded their new QB’s $230 million contract with a base salary of just $690,000 for the first season (as the team expected at least a year-long ban) – have seen their odds improve dramatically on the NFL futures boards in general and the 2022 Super Bowl odds boards in particular.

As of yesterday, those odds looked like this (via BetOnline Sportsbook):

And for good measure, here’s a Watson-specific line as it stood just 24 hours ago:

If you were high on the Browns but haven’t bet yet, hold off. The odds may be about to get a lot longer.

Of course, but – at the same time – they could lengthen themselves right out of the question altogether.

Apparently, the NFL – by some kind of nonsensical corporate gymnastics – is now appealing its own suspension of Watson.

The baffling nature of that reality aside – yes, we know, the criminal-coddling CBA is probably to blame, but even the NFLPA shouldn’t want to look this bad – the league is now seeking to suspend Watson for at least the entire upcoming season and 2022 NFL Playoffs.

So, if that happens – and just because it should doesn’t mean it will – you can be sure the Browns’ AFC title odds and Super Bowl odds (along with Watson’s CPOY odds) will all be in the toilet.

But no matter what, at the very least, please don’t bet on the Browns right now.

After all, even with a healthy Watson under center, they’re still the Browns.

Oh, yeah. About that lead image up top:

Brittney Griner of the WNBA just got sentenced to nine years in Russian prison. Don’t do drugs, kids.

Or, if you’re going to do drugs, at least don’t do them in foreign countries where you’re unfamiliar with local drug laws.

Or, if you’re going to do that, at the very least don’t bring the drugs with you through an airport in said foreign country.