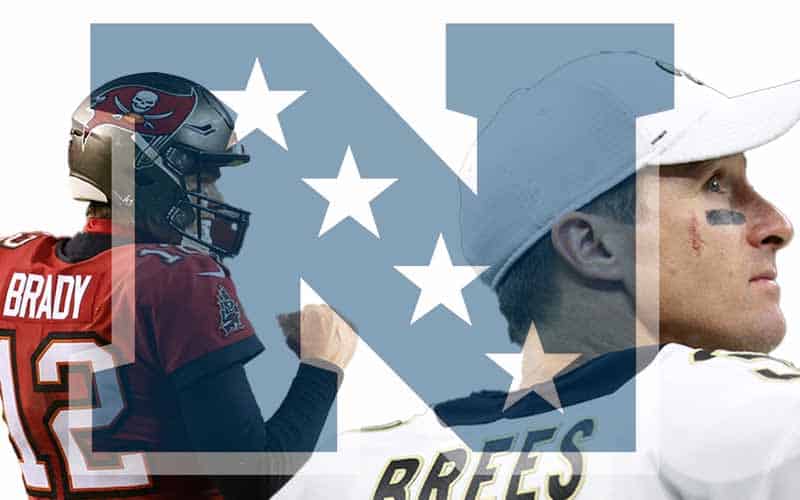 After an eventful Wild Card Weekend that featured six contests for the first time ever, we now look forward to this weekend’s NFL Playoff betting odds for the Division Round.

Although the Baltimore Ravens, Tampa Bay Buccaneers, Cleveland Browns, and Los Angeles Rams advanced to the Round of 8 as the lower seed last weekend, only two of them, the Browns and the Rams were underdogs.

The following NFL betting lines feature point spreads that favor the higher seeds across the board. Playing at home is paramount in the NFL, with home-field advantage coinciding with victory at a higher percentage during pro football’s postseason.

Oddsmakers typically build in a 2.5 point spread advantage for the home team before shifting the odds using further data and calculations.

For instance, if Team A would be predicted to defeat Team B by 10 points at a neutral location, the spread would be reduced to 7.5 if Team B were playing at home.

With that in mind, Divisional Round NFL Playoff betting sites are implying that the Ravens vs. Buffalo Bills and Tampa Bay vs. New Orleans Saints games are matchups of teams that are dead even in regard to roster talent, quality of coaching, and point production vs. defensive effort.

There’s no question – the game that will generate the most interest over the weekend is when Tom Brady at the 5th seeded Buccaneers face off against a Drew Brees’ led Saints squad that has not tasted Super Bowl glory since 2010 (Super Bowl XLIV).

Legacy is also on the mind of Tampa’s quarterback Tom Brady. He already possesses the most Super Bowl wins by an NFL Player (6), and is looking to further separate himself from the pack – this time with a brand-new team.

The dismal fate of the New England Patriots in 2020 following Tom Brady’s departure will be further evidence of his excellence if he can lead Tampa Bay to a Super Bowl 55 victory. It’s a big if, but the Buccaneers are loaded with talent on both sides of the ball.

The largest obstacle for Brady and Tampa Bay is that they will have to win all of their playoff games on the road, which means that even if they defeat the Saints, they’ll face the prospect of traveling to play the Green Bay Packers – in Milwaukee – in January – outside.

Despite what the odds may indicate, they play the games for the purpose of settling it on the field. So snuggle up with a warm blanket, get your bets in early, and enjoy the NFL’s Divisional Playoff Weekend as the contenders for the AFC and NFC Championship advance.