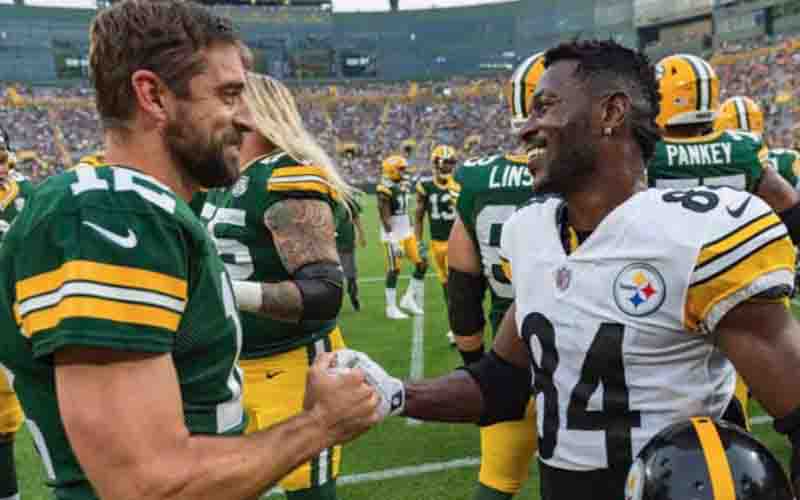 Just a couple of seasons ago, Antonio Brown was among the best wide receivers in the game and well on his way to becoming a member of the NFL’s Hall of Fame.

After demanding his release from Pittsburgh, Brown has spent the last two seasons making brief appearances with the Las Vegas Raiders, New England Patriots, and eventually earning redemption as a member of the Super Bowl 55 Champion Tampa Bay Buccaneers.

Last weekend, during the third quarter in a game against the New York Jets, Antonio Brown refused two requests from head coach Bruce Arians to enter the game. Following Brown’s second refusal, he removed his shoulder pads and walked off the field for the last time as a member of the Bucs.

Brown is now claiming that the team wanted him to play while injured, but the damage caused by his exit could mean the end of his career because general managers around the league won’t want to risk a similar outburst despite the potential offensive production he could provide.

NFL betting sites have now posted prop bets asking which franchise, if any, will sign Brown for the 2022-23 season.

The most probable outcome according to the above NFL prop bet indicates that Brown has likely laced up his cleats for the last time in the National Football League.

The most favored team on the board for Brown to sign with are the Green Bay Packers, but they are separated by 900 points in the moneyline odds from the second-rated option, indicating a low probability of occurring.

While betting on the Green Bay Packers to sign Antonio Brown may not make a lot of sense from a financial risk perspective, on paper, he is a good fit for their offense.

For starters, having the leader in the odds for NFL MVP betting in the huddle helps. With Brown possessing the potential for outlandish behavior on and off the field, having a leader like Aaron Rodgers in place is key.

The Packers could use Brown on their roster for their run in this year’s NFL Playoffs, however, Antonio is still a member of the Tampa Bay roster and has been moved to injured-reserve status with “personal issue” cited as the rationale.

That’s likely a strategic move by the Bucs so that another team cannot sign Brown and allow him to come back to haunt them in the postseason.

That means that Green Bay, or any other team that wants to sign Brown, will have to wait until next season to do so. Speaking of the 2022-23 NFL season, there is also a prop bet asking what team Aaron Rodgers will be playing for during Week 1.

Right now, the Denver Broncos have a slight edge over the Packers, but any of the teams listed above could certainly benefit by Aaron Rodgers lining up under center.

NFL bettors can also benefit by taking advantage of the moneylines above because profits can be earned no matter which team Aaron Rodgers signs with for next year, even if is with Green Bay.