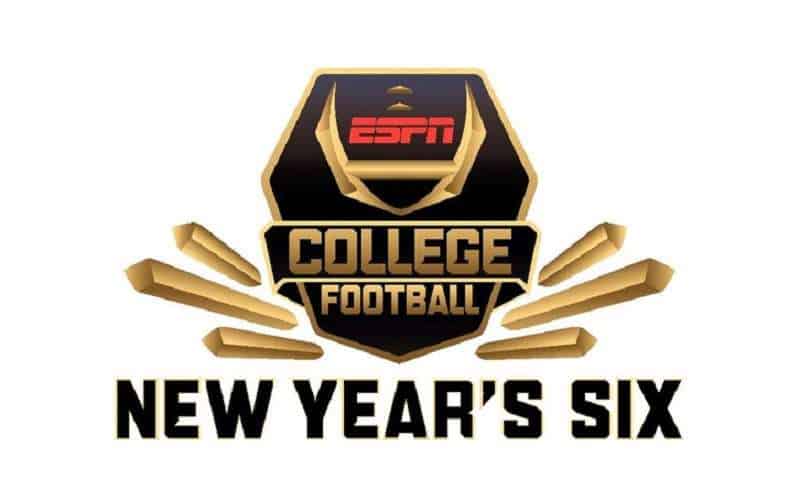 Today’s college football bowl games round out the non-CFP New Year’s Six matchups prior to the playoffs beginning tomorrow evening, and we’ve got all the college football playoff betting odds covered right here for today and tomorrow’s action.

First up, we’ve got the Peach Bowl which is set to begin on ESPN at noon today. The 8th ranked Cincinnati Bearcats of the AAC will face off against the SEC’s Georgia Bulldogs.

Georgia is favored to win by a touchdown and wrap up a solid 2020-21 effort, although they didn’t quite live up to their lofty preseason expectations of reaching the CFP.

The Peach Bowl: Cincinnati vs Georgia

The midday NCAAF New Year’s Day action continues as the Fiesta Bowl begins on ESPN at 4 pm. The 10th ranked Iowa State Cyclones are playing out of their minds this year and are looking to cap off their season in an impressive manner versus the 25th ranked Oregon Ducks.

This PAC-12 vs. Big 12 challenge features ISU as a slight favorite in what is predicted to be a 26-22 victory for the Cyclones if the odds play out as they are listed below.

The last bowl game of New Year’s Day comes to us from Miami, Florida as the Orange Bowl is the host to the 13th ranked North Carolina Tarheels and the 5th ranked Texas A&M Aggies who narrowly missed out on the College Football Playoffs.

The game begins at 8:00 pm on ESPN and features some of the best teams that the ACC and the SEC have produced during the 2020-21 season, although neither are traditional NCAAF powerhouses. These college football betting odds predict the Aggies will wrap up the year in strong form by whipping the Tarheels by a touchdown or more.

Tomorrow’s line-up features the two bowl games that have been selected to host this year’s College Football Playoff games – the Sugar Bowl and the Rose Bowl.

The CFP betting odds receive action in the early evening as the first of tomorrow’s games, the Rose Bowl, begins at 4:00 pm on ESPN. The Clemson Tigers had no issues beating the stew out of the Notre Dame Fighting Irish in the ACC Championship Game, and oddsmakers are now predicting that the Alabama Crimson Tide are poised to do the same thing tomorrow.

To close out the New Year’s Six Bowl Games and wrap up the CFP Semifinal Round, the Sugar Bowl will air on ESPN at 8:00 pm and feature the Clemson Tigers against the Ohio State Buckeyes.

The spread implies a reasonably close game, but the money line suggests that Ohio State has no real shot of winning and representing the Big Ten Conference in the National Championship Game on January 11th in Miami Gardens, Florida.

What these NCAAF National Championship betting odds suggest most of all is a title game featuring the top two college football programs in the country – Clemson and Alabama.

Now that’s a heck of a way to bring in 2021, and will be a sure-fire hit with college football bettors, generating massive television ratings along the way. Happy New Year!