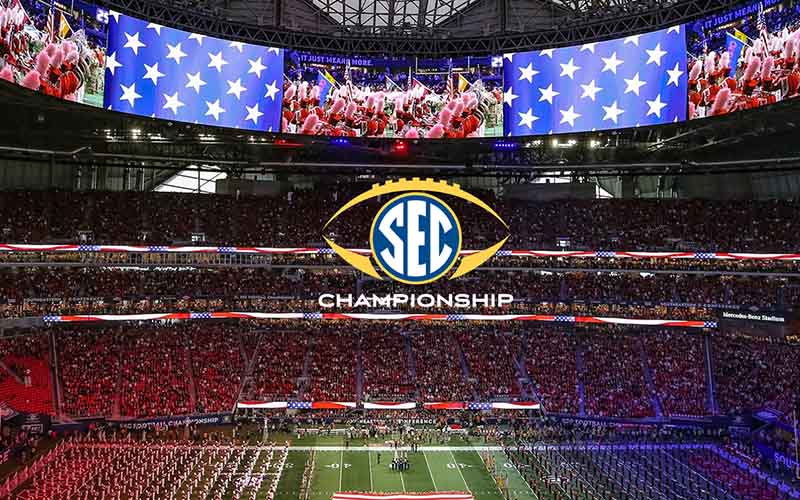 As the 2021-22 NCAAF regular season nears its conclusion with conference championships occurring this Saturday, the Pac-12 and Atlantic Coast Conference (ACC) do not have the potential to place one of their programs into the College Football Playoffs.

The SEC is certain to feature at least one team in the CFP, and could take up two of the top four seeds if the Alabama Crimson Tide are able to upset the Georgia Bulldogs and win the SEC Championship.

The following line from Bovada is similar to the odds posted at many college football betting sites in that they are favoring Georgia by nearly a touchdown.

If the above SEC Championship Game betting line proves to be accurate, the Bulldogs will beat the Crimson Tide by a final score of Georgia 28, Alabama 22.

Alabama is no slouch, however, and despite several recent “close calls,” the Tide has what it takes to knock off the Dogs and win the SEC en route to the College Football Playoffs.

If you believe Alabama will make it to the playoffs, then consider risking some bankroll against their +200 moneyline odds at CFP betting sites where gamblers can double their cash.

The Cincinnati Bearcats have one more game to win on their quest to not just finish undefeated, but to actually be included in the College Football Playoffs when the Selection Committee renders their final rankings following this weekend’s championship contests.

If Georgia loses to Alabama, that could create an issue for Cincinnati. The Bearcats would still have a chance to earn a final four seed in that event, but they might need some help from Iowa or Baylor.

2011 was the last time that the Michigan Wolverines beat the Ohio State Buckeyes, but that decade of misery has been supplanted by the ecstasy of potentially reaching the CFP and winning a national title if they can just get by the Iowa Hawkeyes.

Betting on the CFP National Championship can be done at any time of year, but Michigan has only become relevant in recent weeks for playoff contention.

Now, the Wolverines find themselves three wins away from earning their first NCAAF National Championship since 1997, with favorable Big Ten title odds for Saturday afternoon as well.

The Oklahoma State Cowboys have been impressive as of late and have a chance to become CFP spoilers if they can win the Big 12 Championship with only one loss on their record.

The college football betting odds suggest they’ll win this weekend, but if Alabama becomes SEC Champions, will it be Oklahoma State or Cincinnati that gets the shaft? Tune in Saturday, and be sure to get your college football bets placed in time for kickoff!