Montana sports betting could be launching on thin ice 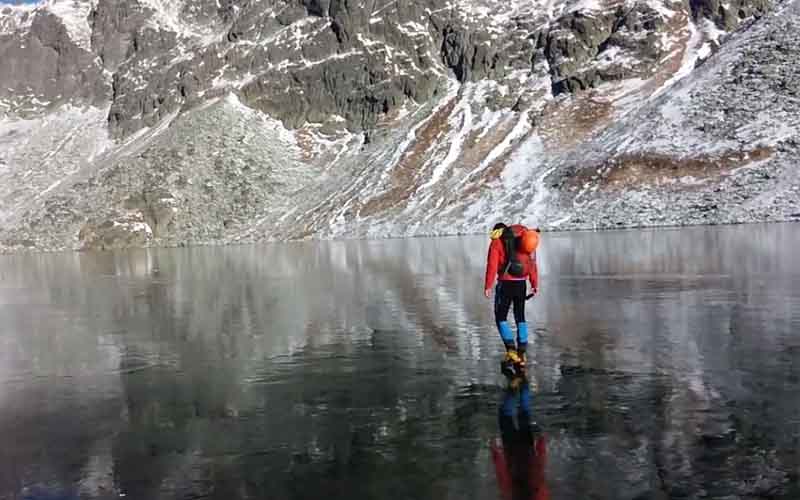 Under the Big Sky, Montana lawmakers and Lottery officials glacially trek across a frozen pond and in the distance they see the launch of legalized sports betting in their state.

But with each step too sudden, the thin ice beneath begins to break, causing the group to proceed with extreme caution—further delaying when they’ll reach the end goal of opening Montana’s first sportsbook.

The treacherous journey of Montana sports betting began back in May when Gov. Steve Bullock signed the state legislature’s passed bill into law, making the state Lottery the sole authority to regulate and offer a sportsbook.

Bars, restaurants, and other similar businesses are eligible for a license, and once approved, operators can set up Lottery-regulated kiosks to accept wagers.

In addition, customers—who are at least 18 years old—visiting local businesses will eventually be able to place bets on a mobile app, but only on the operator’s premises. The state would require passage of new legislation before state-wide online and mobile sports betting is permitted anywhere in its jurisdiction.

But despite Montana legalizing sports betting nearly one year after the US Supreme Court lifted the federal ban—becoming the first state of 2019 to pass a law allowing the activity—there are still no sportsbooks in Big Sky Country.

According to Democratic Rep. Ryan Lynch, the bill’s sponsor, the Lottery-run sportsbooks were supposed to launch in time for the start of NFL football season—the most popular and most bet on sports league in the United States.

But recently, Montana Lottery Director Angela Wong confirmed the state wouldn’t have sports betting ready until the end of the year at the earliest, and there’s a chance that the launch will be further delayed until sometime in 2020.

Wong also said Lottery officials never claimed they would be ready before the NFL’s 100th season kicked off, stating that “it’s quite a task to implement” regulations for operators seeking a sportsbook license, according to the Missoulian.

Part of the hold up stems from lawmakers who have expressed concerns over the Lottery’s existing 7-year contract with Intralot, a Greek-based gambling provider, that was initially signed in 2016.

The Montana Lottery believes the contact with Intralot allows the company to become the sports betting provider since the language of the agreement leaves open the possibility of providing services for additional chance-based games and other forms of gambling.

“The current contract allows room for changes. When it comes to providing gaming services, the Lottery doesn’t contract with individual providers for specific discrete services. Instead, the Lottery has one master contract that covers the whole suite of services,” Wong said.

Wong said she believes sports betting is included under the agreement even though it was legalized three years after when the contract was signed, adding that a recent legal review of the contract confirmed her interpretation.

“The way that the contract is written provides room if there are legislative changes during the time of the contract,” she added.

Republican Rep. Forrest Mandeville disagrees and stated the contract doesn’t usher in Intralot to be the provider of sports betting for the state since the activity wasn’t legal at the time of the agreement.

Mandeville has since called for the Montana Lottery to allow other gambling providers to bid for the state’s sports betting contract, which a fiscal note for the bill—HB 725—indicates is worth between $4.5 million to $6.1 million.

One lawmaker, Republican Sen. Dee Brown, attempted to call a committee in order to force the Montana Lottery to begin taking bids on a sports betting provider contract—a move that proved to be impossible under standard procedures.

“I think that we need to make a statement, and the statement being that we’re working in a new field, we expect the taxpayer and the people to get a sharp pencil out, and we have a new (request for proposals),” Brown said.

Rhonda Wiggers, a lobbyist for the Montana Coin Machine Operators Association, stated earlier in September that she too disagrees with the notion that sports betting was included under the original contract.

“This is an entirely new game,” Wiggers said. “(The contract) did not contemplate a whole new type of betting.”

The longer the debate over the Montana Lottery-Intralot contract continues, the odds of sports betting coming to the state any time soon will prove to get longer as well.

With neither Lottery officials or state lawmakers showing signs of budging, the issue has the potential to be settled in a courtroom in the near future.

And if that happens, then the launch of Montana sports betting could be delayed indefinitely after both sides break the pond’s ice, freeze the issue, and ultimately, leave Montanans—who just want to bet on sports legally—out in the cold.