Monday Night Football Betting: Da’ Bears Are A Touchdown Dog At The Steelers 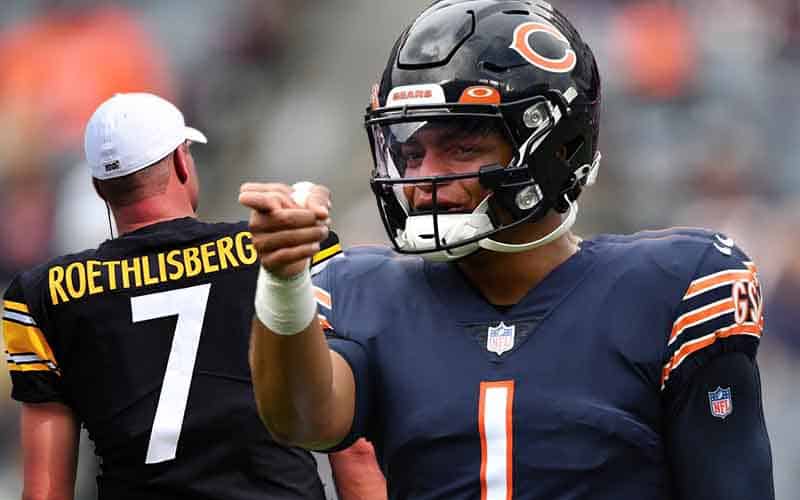 Tonight at 8:15, Monday Night Football on ESPN features two NFL teams that are struggling to keep their heads above water in the race to reach the postseason.

It is a tale of two storied franchises, one with a quarterback in his first year of play and another with a future Hall-of-Famer at QB in what could be their last campaign.

Both are hovering around .500 with their sights set on the NFL playoffs, and the loser will find themselves in a hole that will take several weeks to climb out of.

Betting on the Steelers and the moneyline odds of -310 will require wagers of $3.10 to net a dollar on a Pittsburgh win, but why are oddsmakers so confident in that outcome?

The Bears have been struggling to maintain offensive consistency this season with rookie Justin Fields at the helm. Their 3-5 record should impress no one, however, they are very much alive in the odds produced for betting on the NFL Playoffs.

The Steelers would qualify for a wild card playoff spot in the AFC if the season ended today, and they’ll need a win against the Bears to keep pace as the Kansas City Chiefs, New England Patriots, Cleveland Browns, Denver Broncos, and Cincinnati Bengals are all 5-4.

NFL betting on the Bears this season has been no easy feat due to their previously mentioned inconsistency. In back-to-back weeks they handled the Bengals with ease and then lost to the Browns.

Chicago hangs close with the Green Bay Packers and then gets blown out by the Tampa Bay Buccaneers. That’s why the MNF point spread is so intriguing.

When placing a wager on consistency versus the opposite, wisdom suggests leaning toward the prior. Inconsistency implies performances that are all over the map, both high and low.

Which will it be tonight for the Chicago Bears and Justin Fields. Have a look at his season stats thus far and you might wonder why anyone would lean toward a positive outcome.

The above stat line is dismal and hardly the numbers a starting quarterback in the NFL would hope for. Production levels like that would cause the benching of any QB other than a rookie trying to get used to the speed of the game.

Where Fields has made up some of the difference is with his legs.

Still, one would think that Fields’ rushing prowess would keep defensive backs guessing and allow for open passing lanes, but that isn’t the case. Sure, Justin has been productive on the ground, but not enough to lower those interception numbers.

Bears’ running back David Montgomery is slated to return to the lineup tonight after missing over a month of action. His presence in the offensive backfield will certainly alleviate some of the pressure off of Fields’ back and could serve to keep that point differently well within the predicted 7 points.