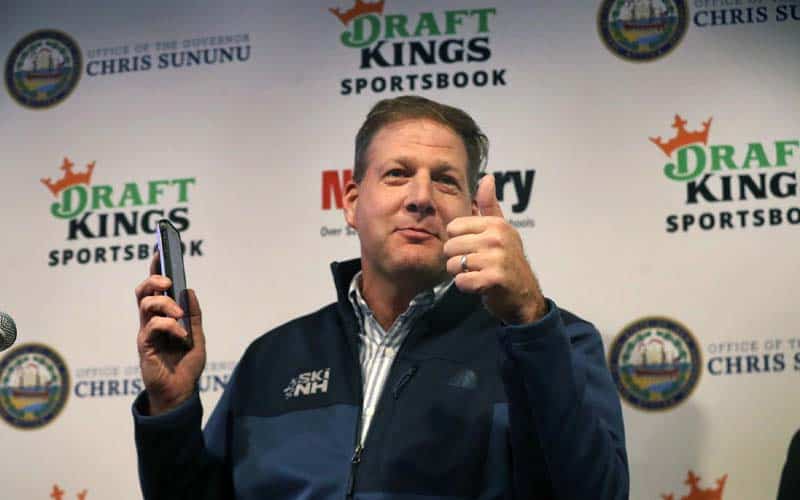 After launching earlier this week, thousands of New Hampshire sports bettors are already shouting, “Show me the money!”

In the day following Republican Gov. Chris Sununu placing the ceremonial first bet—an $82 bet (as the 82nd governor of New Hampshire) on the New England Patriots to win Super LIV—it appears NH sports betting is off to a strong start.

Sports betting is LIVE here in the Granite State! We moved fast to get this done to bet on the @Patriots in time for the Super Bowl. Thanks to a packed crowd at @ShoppersMHT for joining us despite the snow! pic.twitter.com/RQjTF94DG7

According to Charlie McIntyre, the executive director of the New Hampshire Lottery, more than 6,000 users registered an account on DraftKings, and more than $250,000 was bet on sporting events precisely one day after the governor placed the first wager.

“In just 24 hours, the response to online sports betting has been overwhelming,” said McIntyre. “Clearly, there is strong consumer demand that will only grow as we market this new and exciting product.”

Anyone who is at least 18 years old and has two feet inside the NH state lines is now allowed to place sports bets legally.

As the 14th legal sports betting state, New Hampshire is projected to haul in millions of dollars in revenue to fund public education.

Despite the NH Lottery’s exclusive six-year deal DraftKings giving the Boston-based gaming company a monopoly over the state’s sports betting market, the 50/50 revenue split is projected to bring in $7.5 million for education during the first fiscal year and an estimated $13.5 million for 2023.

Unlike many other states, New Hampshire launched its online and mobile sports betting app first instead of accepting in-person wagers at a land-based casino or racetrack.

The NH law does not require DraftKings, or any future Internet-based sportsbooks, to operate as a “skin” for a physical location. However, the bill—signed by Gov. Sununu in July—does allow up to 10 retail brick-and-mortar locations for a sportsbook. DraftKings is expected to open physical sportsbooks across the state throughout 2020.

The projections for New Hampshire increased after the inaction from other New England states during the 2019 legislative sessions the issue of making sports betting legal.

Currently, only Rhode Island offers sportsbooks while the Maine Legislature passed a bill last year, but it was ultimately pocket vetoed by Gov. Janet Mills.

Connecticut, Massachusetts, and Vermont attempted to pass legislation in 2019, but all proposals never made it out of committee.

Many lawmakers that still haven’t got on board with legalization are expected to take a closer at bringing sportsbooks to their respective state once the 2020 legislative sessions begin in early January.

Six states—Colorado, Illinois, Michigan, Montana, North Carolina, and Tennessee—along with Washington DC, have already legalized at least one form of sports betting and are expected to launch sportsbooks this year.