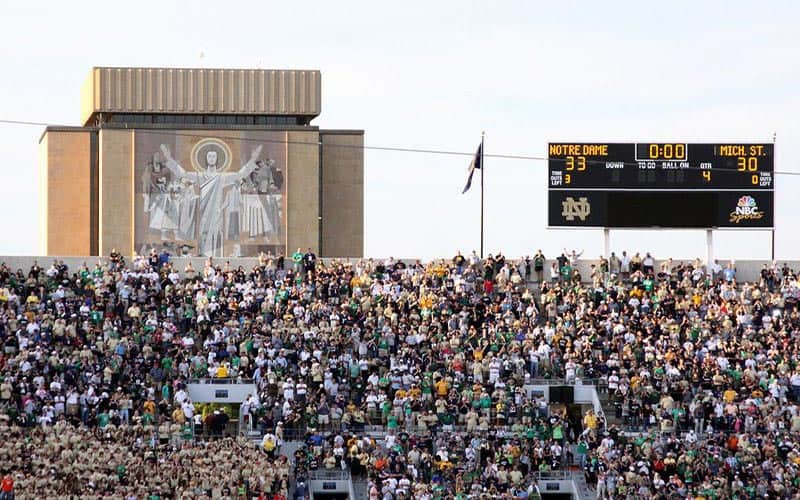 And Indiana said, “Let there be sports betting,” and there were sportsbooks.

Indiana called the sportsbooks “legal,” and the back-alley bookies it called “illegal.”

And there was before PASPA, and there was Sunday, September 1—the first day of legal sports betting in the state.

The Word of Life Mural—more commonly known as “Touchdown Jesus” thanks to the Son of God’s gesture resembling that of a referee signaling “touchdown”—found on the Hesburgh Library exterior facade has watched every college football game played at Notre Dame Stadium in South Bend, IN since 1964.

Touchdown Jesus is one of the most iconic images found in all of college football. It is thought to bring good luck among the Fighting Irish faithful, and with Notre Dame kicking off their 2019 season on Labor Day tomorrow, many will surely begin praying that it also helps them cover the point spread.

Gov. Eric Holcomb, who signed the bill into law back in May, placed the ceremonial first wager at the Indiana Grand Racing and Casino in Shelbyville, owned by Caesars Entertainment.

As in all things in life, moderation is key. Never bet more than you can afford to lose. I wagered:

If any of his wagers hit, he pledged to donate his winnings to the Indiana Canine Assistance Network, a nonprofit organization that allows inmates preparing to rejoin society the opportunity to train service dogs for adults and children with disabilities.

After placing the three wagers, he gave IN sports bettors some wise words of advice in a tweet saying, “As in all things in life, moderation is key. Never bet more than you can afford to lose.”

The governor’s message is one that all lawmakers should echo when passing and signing the legislation, since being responsible and having self-control is the only way to stop problem gambling before it starts.

Although only in-person betting at a physical location will be available at first, online and mobile bets placed from smartphones, tablets, and computers is expected to come sometime during football season.

The Indiana Gaming Commission finalized the rules for legal sports betting in the state on Wednesday, August 28 and began authorizing operators shortly after.

There was initially some doubts among IGC officials about whether operators would be ready to accept bets on the 2019 NFL season, which kicks off its 100th season on September 5 with a matchup between the Green Bay Packers and the Chicago.

College football betting has already begun, but several of the Indiana casinos and off-track betting parlors worked non-step and managed to beat the ticking clock on meeting the requirements before the most popular betting season of the year begins in the United States.

Indiana becomes the latest state to legally allow wagers to be placed on sports in the nearly 16 months since the US Supreme Court struck down the Professional and Amateur Sports Protection Act of 1992, which had prohibited all states—excluding Nevada—from offering regulated sportsbooks.

And the Hoosier State is far the last to offer legalized sports betting. Illinois, Montana, New Hampshire, North Carolina, Tennessee, and Washington DC have legalized sports wagering this year and are currently pending launch in either late 2019 or early 2020.

With legal sports betting in Indiana officially underway, here’s everything you need to know before placing a wager at a sportsbook in the state.

Mobile restrictions: Must have two feet inside state lines, Indiana colleges and universities can prohibit betting on its premises

General restrictions: No bets allowed on esports or sporting events where amateur athletes under age 18

Sports allowed: All professional and collegiate sports, and sportsbook operators may offer odds and betting lines on addition sports after approval by the IGC