Out of Luck: The Colts odds plummet across the board after Andrew Luck’s retirement 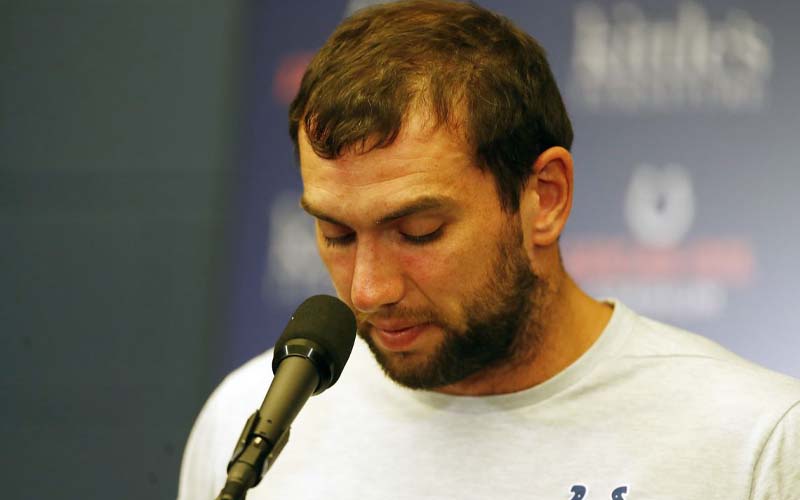 They say it’s better to be lucky than good—but the Indianapolis Colts would probably like to have Luck and be good.

Over the weekend, Colts QB Andrew Luck shocked the National Football League with news that he was retiring immediately citing repeated injuries throughout his career. The former No.1 overall pick out of Stanford is only 29 years old.

“We wish Andrew only the best and we thank him for all his efforts that he’s done as a Colt,” Indianapolis Colts owner Jim Irsay said Saturday night.

The team supports Luck and his decision, but this is still a big blow to their betting odds across the board.

Before Luck’s retirement, Bovada gave the Colts -105 odds to win the AFC South. Now, BetOnline gives them the worst chances in the division at +450. The Texans are now the division favorite, going from +275 to +185 odds.

Also taking a hit was the Colts over/under win total, which was set at 10 games with +105 odds on the over, the most in the AFC South.

The outlook is much less favorable now. According to BetOnline, the Colts’ over/under is now set at 7 wins. The Houston Texans now have the highest over/under with 8.5 wins and the Colts have dropped to the fewest total wins.

Losing Luck also ends any major Super Bowl aspirations that the team may have had. The Colts are now in the bottom half of the NFL in terms of Super Bowl LIV odds at +5000. Pre-retirement, their odds were +1600. The NFL betting odds for the Colts have literally plummeted.

Division rivals Jacksonville (+2500) and Houston (+2000) have better chances to win the Super Bowl while Tennessee shares +5000 odds with the Colts.

Luck is giving up more than team success with his retirement. Two weeks ago, BetOnline gave Luck the third-best chances, +1200 odds, to win the NFL MVP. Only Patrick Mahomes (+600) of the Kansas City Chiefs and Carson Wentz (+900) of the Philadelphia Eagles had better odds.

Since Luck’s announcement, there’s only been a slight shift in odd for the top 10 MVP hopefuls.

Despite his retirement, many players have returned after a season or two away from the game. Bovada is taking action on whether Luck will play professional football again within the next two years, whether in the NFL or XFL. Right now, the odds favor “neither” at -4000 odds

Will Andrew Luck play in the NFL or XFL in the next two years?

This isn’t the only prop bet for Luck. BetOnline is also giving odds on similar scenarios, including Luck’s playing possibilities in 2019 and 2020. Neither are favorable at -1500 and -1000 odds, respectively.

Will Andrew Luck play in a game in the 2019 Regular Season?

Will Andrew Luck play in a game in the 2020 Regular Season?