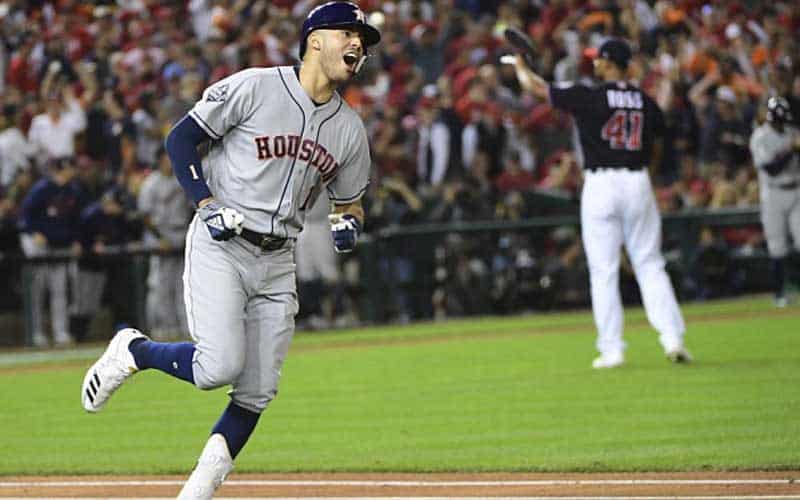 Everything looked great for the Washington Nationals last Thursday. Then the weekend hit.

After their 12-3 victory in Game 2 on Wednesday, the Nationals were up two games to none on the Houston Astros. Justin Verlander had just laid an egg on the mound for the ‘Stros and Washington was riding high.

Heading into Game 3 on Friday, the Astros were favored to win the game with -128 odds, but Washington still owned the series odds -260 to +220.

Houston had a steady barrage of scoring, bringing in runs during the second, third, fifth, and sixth innings. Washington was only able to score a single run in the fourth, ending the game with a 4-1 loss.

Still up 2-1 in the World Series entering Game 4, Washington wasn’t able to produce the scoring needed to keep up with Houston. The Astros finished the game with eight runs, including two in the first inning.

Losing the game 8-1 to Houston, the series was tied up 2-2 after Saturday.

On Sunday, the third straight day of World Series baseball, the two teams squared off in a decisive Game 5 showdown. Again, the Nationals were only able to score a single run while the Astros tallied seven for the game.

With Game 6 tomorrow night, the World Series betting odds are not in favor of the Nationals. As Houston has won three consecutive games to go up 3-2, their streak is expected to carry over tomorrow.

Houston is a 1.5 run favorite over the Nats in Game 6. Despite the Game 2 matchup of Verlander and Stephen Strasburg going Washington’s way, Houston is favored with -177 odds this time around.

The over/under for the game is set at 7.5 runs, favoring the under at -120. However, for every game except Game 3, the run total has broken eight between the two teams.

The most important numbers, though, could be the huge shift in the series odds. Houston is now favored to win the World Series as -850 odds, or 87.16%. The Nationals, despite their former 2-0 lead, only have +550 odds– a 12.84% chance– of winning two-straight games.