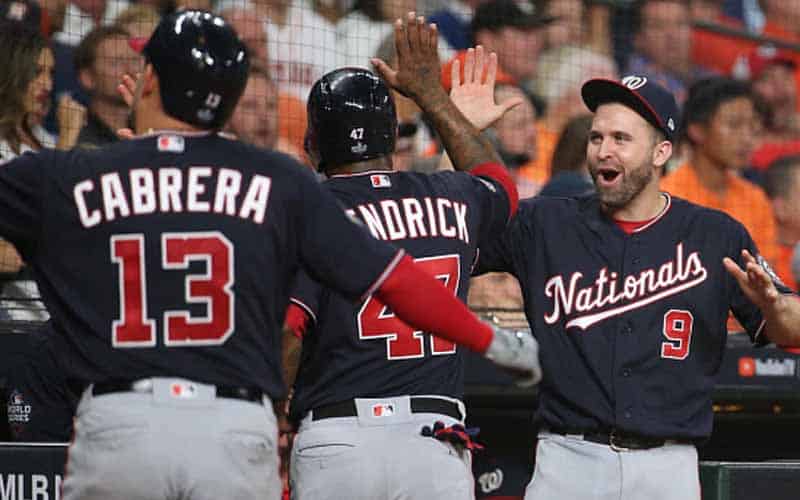 I know we said this yesterday, but I think it is due for again: no one saw this coming.

The Washington Nationals rocked the Houston Astros in Game 2, winning 12-3 despite Justin Verlander starting for the ‘Stros. Ironically enough, it was a play by the Houston ace that sums up the entire game for the team.

In the top of the fourth inning, while the game was still tied 2-2, Verlander tried to throw the batter out at first base from his back. Instead, he just threw the ball off his own leg.

Justin Verlander tried to make a play while falling down and ended up throwing the ball into his own leg 😂 pic.twitter.com/skNCND0NTE

It’s been that kind of series for the formerly favored team. Entering Game 1 of the World Series, Houston’s MLB betting odds were actually pretty solid entering a championship showdown.

The Astros were favored in the series price, taking -215 odds into the Fall Classic. Despite their 65.96% chances of winning it all, Houston is in a deep hole.

In Game 2, Houston was favored with -178 odds and they lost by nine runs.

According to the MLB, only 10 teams have come back from an 0-2 deficit in the World Series.

Houston is favored again in Game 3, although that has not meant much to the team so far. The Astros have -128 odds compared to Washington’s +108 chances.

Starting their third ace in Zack Greinke, Houston is a 1.5 run favorite– just as they have been in the first two games. Anibal Sanchez will pitch for Washington in his third start of this postseason.

The over/under for Game 3 is set for 8 runs with -110 odds of it going either way. Given the 15 total runs scored last night, 8 runs is totally possible.

However, the biggest move in the numbers belongs to the series price. After the Game 1 win, Washington became World Series favorites by a slim margin of -120 to Houston’s -110.

But after the decisive Game 2 victory, Washington’s series odds jumped to -260 compared to +220 for the Astros.

The teams have a break tonight and will play Game 3 at 8:07 pm ET Friday night on Fox.