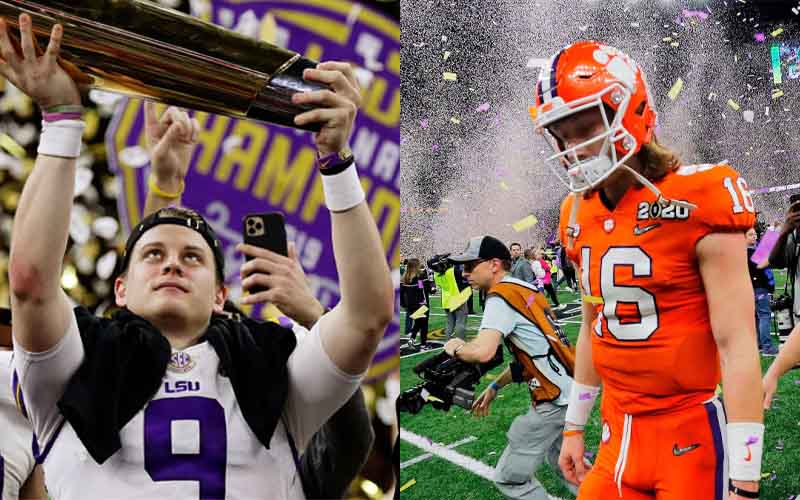 The grounds crew is probably still cleaning up the purple and gold confetti at the Superdome, but the national championship betting odds favor purple and orange in 2021.

Heisman Trophy-winning quarterback Joe Burrow led the No. 1 LSU Tigers to a 42-25 victory over the No. 3 Clemson Tigers in the 2020 College Football Playoff National Championship, capping off one of the all-time greatest seasons for any player in the 150 years since the berth of the sport.

By adding 463 yards and five touchdowns through the air and 58 yards and a score on the ground, the safest bet to be selected by the Cincinnati Bengals with the No. 1 overall pick in the 2020 NFL Draft finished the season with video game numbers.

Here’s a look at where Burrow’s 2019-20 season ranks among all college football quarterbacks:

LSU entered Monday night’s “Tiger Bowl” as a 5-point favorite over Clemson and easily covered the point spread with their 17-point win.

However, the over/under 67.5 likely caused a spike in heart attacks nationwide. With 67 total points scored between the two teams, bettors who took the over are likely consulting their doctor today while those who wagered on the under are no doubt laughing all the way to the bank.

But enough about last night’s title game. It’s now officially in the past—history, donezo, and finito!

Instead, let’s turn our attention to the way-too-early odds to win the CFP championship on January 11, 2021, at Hard Rock Stadium in Miami, Florida.

For those of you who regularly bet on college football legally, you may think it’s a bit too early and too difficult to predict which NCAA Division I FBS team will be next season’s national champion with 364 days remaining until the title game.

And you would be right to think that way. However, immediately after seeing Clemson maul Alabama in the 2019 CFP championship, bettors who placed an early 2020 title wager on LSU, who were +5000 (1.96% implied probability), saw a huge return on investment last night.

Burrow, a senior, is heading to the NFL, but sophomore quarterback Trevor Lawrence, the projected No. 1 overall pick in the 2021 NFL Draft, will be under center once again for Clemson.

As a result, the oddsmakers at BetOnline Sportsbook have installed the Clemson Tigers as the clear favorite to win the 2021 CFP championship. At +225, they have an approximately 30.77% chance of winning next year’s title.

Clemson is followed by the Alabama Crimson Tide at +350, who will need to fill the void left by quarterback Tua Tagovailoa, which should be a problem for coach Nick Saban.

The Ohio State Buckeyes take the third spot at +450, LSU is given +600 to win back-to-back titles, and the Georgia Bulldogs round out the top five at +800.

The early 2021 national championship odds begin to drop off from there, with the Florida Gators at +1400, Auburn Tigers at +2000, Oklahoma Sooners at +2000, Notre Dame Fighting Irish at +2500, and Texas Longhorns at +2500 making up the top ten college football teams with the best chance of winning it all next season.

A list of the early 2021 title betting odds can be found below. And now, we all begin the countdown—only 223 days until the 2020-21 college football season begins…