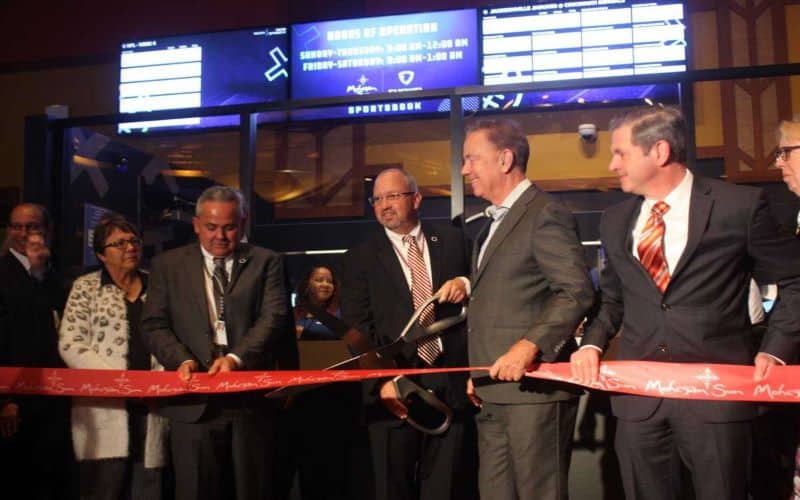 State-licensed sports betting has officially launched in Connecticut! On Thursday, residents were offered the first glimpse at retail sports betting via a soft opening at each of the state’s tribal casinos.

Thursday morning brought many celebrations, as Governor Ned Lamont kicked off the day’s events with a ribbon-cutting ceremony at the Mohegan Sun casino. Patrons were later welcomed into the casino’s Sports and Arrow sports bar to place bets at the various kiosks.

Before departing the Sun to head down to the Foxwood Resort & Casino, Governor Lamont placed a $50 bet on the Connecticut Sun. This wager was the Governor’s first-ever sports wager and sent a broad message of approval and excitement to his constituents.

Then, just 20 minutes down the road, Lamont went on to congratulate the Mashantucket Pequot Tribe on their recent deal with DraftKings. At Foxwood, the Governor placed another two bets, this time on the Yankees and Buccaneers to win their next two games.

Connecticut sports bettors will have to wait another week or so to place wagers via non-tribal or online sportsbooks. This is because the Mashantucket Pequot and Mohegan Tribes used their sovereignty to open early.

The Tribes’ current sports betting locations are only temporary, as they are working with their partners to develop permanent facilities. Nonetheless, these locations were far from lacking in terms of patrons on Thursday.

More Sportsbook Options On the Way

Other CT retail options will open on October 7th, with online betting to come a few days later. Connecticut’s gambling expansion was passed earlier this year, following in the footsteps of neighboring states who had already authorized sports betting legislation.

Frankly, the sudden and widespread move towards domestic CT sports betting is a direct result of the COVID-19 pandemic. Many lawmakers were staunchly opposed to state-licensed sportsbooks until the pandemic depleted casino earnings.

When asked about his initial feelings about gambling expansion, Governor Ned Lamont said the following:

“It wasn’t one of my big priorities to tell you the truth,” Lamont said. “But again, the time was right, the world was going virtual, I want the casinos here to thrive and it means real revenues for the state, so we put it on the front burner.”

It seems that Connecticut lawmakers and gaming officials were able to successfully circumvent any legal obstacles that would have hindered a September launch. This is much more than can be said for other states still trying to kick off legal sports betting.

That being said, we congratulate the state of Connecticut on successfully entering the sports betting market.