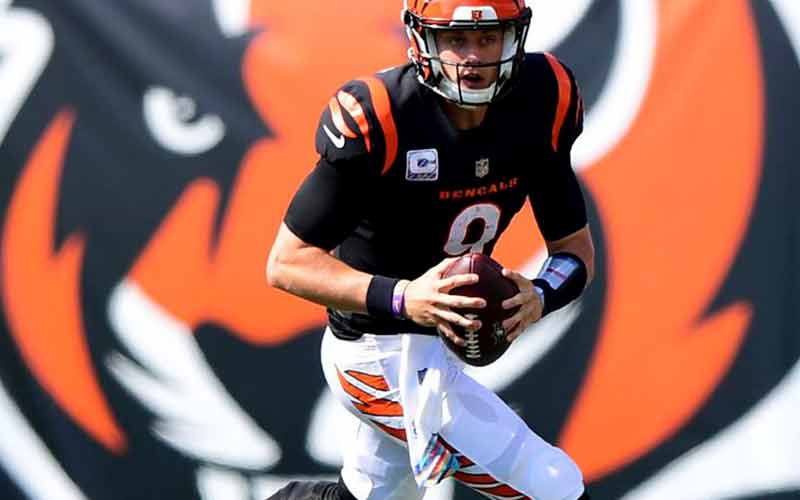 After a 41-17 trouncing of the Baltimore Ravens last Sunday, the Cincinnati Bengals are entering mid-season as the number one seed in the American Football Conference and standing tall as the clear-cut leader of the AFC North Division.

Betting odds posted at the top online NFL sportsbooks do not share the enthusiasm that Bengals fans are relishing in at the moment, as they are the 7th most likely team to reach Super Bowl 56 according to Bovada.

What is causing the differential between the expectations of football oddsmakers and the current standings?

Bengals quarterback Joe Burrow is just behind Dak Prescott in NFL prop bets for the Comeback Player of the Year, but the way he is playing he should be rated higher in the MVP race.

Have a look at the following NFL futures odds that still feature the Ravens ahead of the Bengals by 240 points in the moneyline. Perhaps the time is ripe to invest in the Bengals playoff odds before NFL oddsmakers get wise?

The only thing left to prove for Burrow and the Bengals is whether or not they have what it takes to maintain this level of success over the course of an entire 17-game season.

Fans and online sportsbooks have plenty of ammunition to fuel their doubt for the postseason potential of the 2021-22 Cincinnati Bengals. They’ve never won a Super Bowl, and haven’t been to one since 1988.

The last time the Bengals won a playoff game was in 1991.

But that was prior to Joey Franchise joining the Bengals however, and bettors should take note even though the current NFL Playoff picture bracket doesn’t offer them much hope.

The Kansas City Chiefs were never able to get over the hump with Andy Reid despite loads of regular-season success until Patrick Mahomes became the team’s starting QB.

Difference makers are that for a reason, and Burrow is already looking like the greatest player to ever throw a pass for Cincinnati. Sure, once they reel off a few more wins this season, bandwagoners will hop on.

The question is, do you want to welcome the fairweather fans with the knowledge that you’ve already invested wisely in the Bengals, or do you want to be on the outside looking in once their NFL Playoff odds pull closer to even?

A $1 bet on the Bengals to win the AFC North will net $2.40, but only if the wager is placed right now. Betting on Cincinnati to win the AFC and advance to Super Bowl LVI is set at a moneyline of +1500, rewarding NFL gamblers with $15 payouts on the dollar if they can make it to the big game in February of 2022.

We’re not suggesting that the Bengals are poised to win Super Bowl 56, but stranger things have happened in the past. The odds for betting on the Super Bowl grant Cincinnati a moneyline of +3000, implying a low probability of success but also delivering a large stack of cash if they can bring home the first Lombardi Trophy in franchise history.