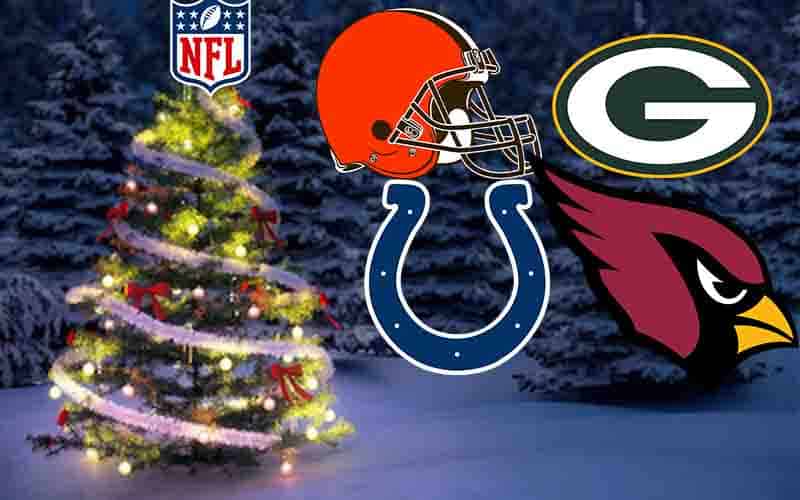 What better way to celebrate the Christmas holiday than betting on the Green Bay Packers against the Cleveland Browns where Aaron Rodgers will look to hold court at home.

The NFL agrees and has provided a Packers game on Christmas afternoon at 4:30 PM on FOX.

Green Bay is favored by a TD against Cleveland which sounds a little short considering the condition that the Browns are in right now. Cleveland put in a noble effort on Tuesday night against the Las Vegas Raiders with 3rd string quarterback Nick Mullens guiding the Browns’ offense, but ultimately they came up short and now find themselves in the cellar of the AFC North Division.

Right now it looks like Baker Mayfield will be able to return to active duty in time for Christmas Day, but the touchdown point spread that is currently on the boards makes us lean toward betting on the Packers to cover.

On Christmas night at 8:15 PM, the NFL Network caps off the holiday with a juggernaut matchup of two teams that are well-favored in the odds for NFL Playoff betting.

The Indianapolis Colts and the Arizona Cardinals are drawing even at Bovada Sportsbook who are offering money-for-money bets on the NFL point spread and moneyline odds.

Just select the team you believe will win on Christmas Day and double your money – but that is no easy task when both teams have loads of talent on their rosters and everything at stake.

The Colts have already been swept by the AFC South-leading Tennessee Titans so they need the win if they intend to keep pace and compete for one of the American Football Conference’s top four playoff seeds.

If the season ended today, the NFL Playoff picture odds project that Indianapolis will make the 2021-22 NFL Playoffs as a wild card team. That will change with a loss against the Cardinals on Christmas, but they’ll by no means be disqualified from contention.

The Los Angeles Rams now have the same win-loss record as the Cardinals in the NFC West, but Arizona has the tie-break edge due to scoring the most points over the course of their two-game series split.

That means the Cardinals are in control of their own destiny and will win the division if they can keep from losing another game, but that is a big “if” when teams like the Colts are remaining on the docket.

The above NFL prop bet at MyBookie places the Cardinals as a reasonably strong favorite to win the NFC West, but the Rams are breathing down their necks and playing well at a time when Arizona is struggling.

We hope all of our readers have been good this year and that Santa rewards you with winning NFL bets on Christmas Day in 2021!