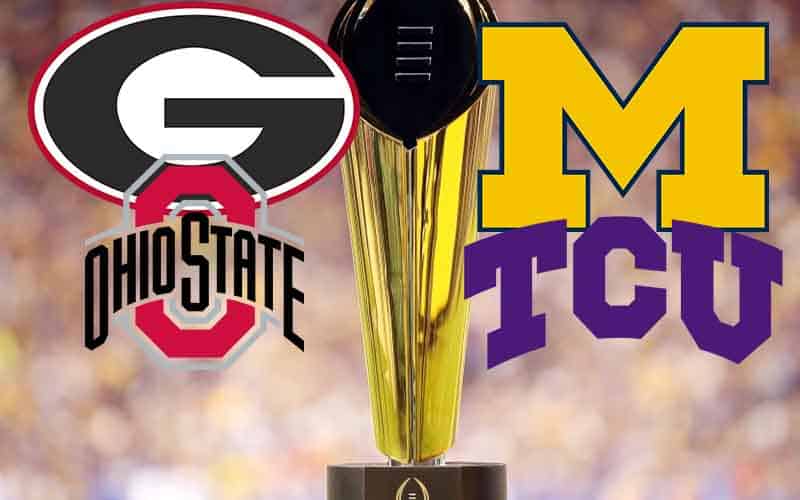 The College Football Playoffs Selection Committee issued their final rankings for 2022-23, placing the #3 Texas Christian University Horned Frogs against the #2 Michigan Wolverines at the Fiesta Bowl and the #4 Ohio State Buckeyes versus the #1 Georgia Bulldogs in the Peach Bowl.

Legal college football betting sites have also weighed in with their own “rankings” for the CFP, with game lines on both contests occurring on New Year’s Eve.

First up is TCU vs. Michigan with a kickoff of 4:00 PM at State Farm Stadium in Glendale, Arizona, the site of Super Bowl LVII.

The Horned Frogs should consider themselves lucky to be among the final four NCAAF programs competing for a CFP National Championship. Consider this – TCU made it into the College Football Playoffs despite not winning the Big 12 Championship Game against Kansas State, finishing with a record that was only one loss fewer than the Alabama Crimson Tide.

The odds for CFP betting aren’t granting TCU much of a chance against the Jim Harbaugh-led Michigan Wolverines, who are entering the College Football Playoffs for the second year in a row.

The Wolverines are favored by 9 points, a massive spread for a CFP matchup, and a near-certain indicator that Michigan will advance to the National Championship Game.

Some of the best CFP odds on the boards are provided by the moneyline for TCU to win. A wager of $1 on a TCU victory will result in a payout of $3.75 if the Horned Frogs are the winners of the Fiesta Bowl.

To close out the evening at 8:00 PM. the #4 Ohio State Buckeyes will battle the top-ranked Georgia Bulldogs for a chance to compete for a National Title at the Peach Bowl.

With the Peach Bowl taking place at Atlanta, GA’s At Mercedes Benz Stadium, it is practically a home game for the Georgia Bulldogs, who are favored by a touchdown over the Buckeyes.

Georgia has held the top spot in the CFP odds and the College Football rankings for nearly the entire season, and bookmakers are not projecting a stumble against Ohio State in the ATL.

The futures for CFP National Championship betting are as follows:

The above CFP futures also reflect an outcome where Michigan and Georgia both advance to the NCAAF Championship Game in Los Angeles, CA’s SoFi Stadium.

The College Football Playoffs National Championship Game is happening on January 9th, 2023, but betting lines will debut as soon as both the Peach Bowl and Fiesta Bowl are over.

In order to secure the best payout, consider laying some action on the CFP futures right now. Even if you want to bet on the Georgia Bulldogs’ odds to win the CFP, they’re never going to be more profitable than right now.

If Georgia makes it to the title game, their moneyline odds to win will be lower than the -135 and -260 that are on the boards at the moment, so consider betting sooner than later.