Most Valuable Props: Can A Non-QB Win The Super Bowl 55 MVP Trophy? 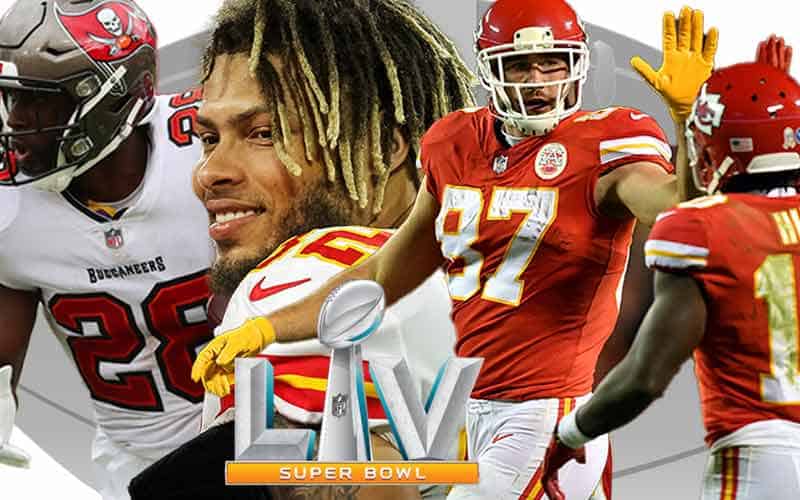 30 out of 54 Super Bowl MVP trophies have been awarded to the quarterback that led their team to a victory. Just look at the Super Bowl 55 MVP odds we’ve listed below from Bovada and you’ll see the disparity between QBs and other positional players.

If you bet on a quarterback to win the MVP of SB LV, you will only be able to earn $0.20 for each dollar that you risk if the wager wins. That’s because online Super Bowl sportsbooks are also aware of how often quarterbacks win the trophy and aren’t willing to risk much against bets for suck a likely outcome.

It takes all 22 players (24 if you include the punter and kicker) to win a game, so why has there been so much emphasis on the quarterback position when it comes to earning the Most Valuable Player honors at the Super Bowl each year?

When championship games are closely contested and there are no individual players that have amassed enough stats to stand out, the default is to give the award to the quarterback of the winning team. For example, Tom Brady’s Super Bowl 36 MVP trophy was granted to him after passing for 145 yards and a touchdown. Those are stats that would normally get a player benched.

At the earliest developmental levels of youth football, coaches look for the best player on the field to play the quarterback position, regardless of size. No other skill-position football player handles the ball more often than the QB, so a heightened level of trust is heaped upon the person that handles that role.

A quick glance at the below Super Bowl prop bet reveals that the top two options are quarterbacks – no surprise.

Wide receivers and running backs have become the Super Bowl MVP 7 times each. On these occasions, receivers and backs amassed over 100 yards, either in the air or on the ground, and in most cases, scored a TD or two. While both the Tampa Bay Buccaneers and Kansas City Chiefs feature pass-happy offenses, anything can happen in the Super Bowl, and every now and then, a running back or wide receiver can take over the game.

The below line does not favor that outcome, but it does narrow the odds down to a more palatable set of options.

You’ll notice that the odds for Brady or Mahomes to bag the MVP are the exact same -500 money line odds that are offered on the positional line at the top of the page. It’s no coincidence.

While the MVP odds for “Any Other Player” to win are still profitable at +325 ($1 bets win $3.25), you can earn much more by selecting the individual non-QB player correctly.

For instance, if Travis Kelce can become the first tight end to ever win the Super Bowl MVP, winning bets on him will cash in at 10x! Cruise over to Bovada and make your Super Bowl MVP bets today and don’t miss out on these profitable odds.