Bills vs. Chiefs Odds Narrow Due To Heavy NFL Playoff Betting On Buffalo 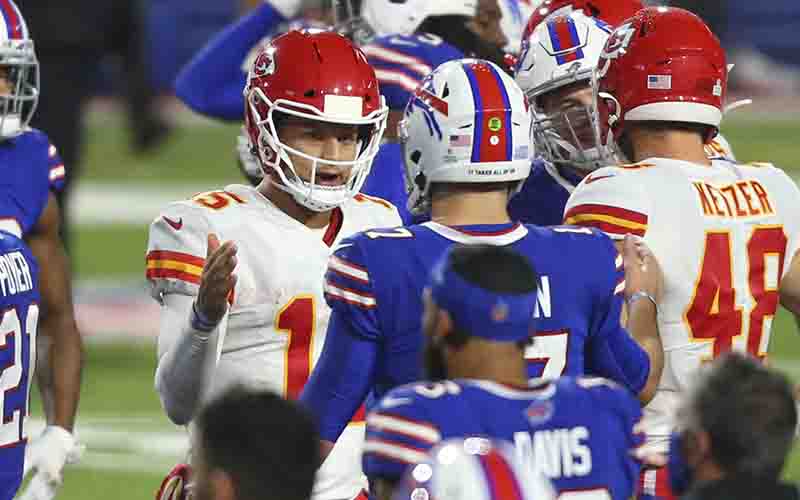 The NFL Playoff betting line between the Kansas City Chiefs and the visiting Buffalo Bills continues to pull closer to even as more money appears to be coming in on the AFC East champions than their counterparts in the west.

Just a few short weeks ago, this would not have projected out to be much of a contest as KC was rolling while the Bills were struggling to remain atop their division,

Now, the Bills are coming into form just in time for betting on the NFL Playoffs, and online gamblers have noticed.

What started out as a three-point spread has now closed down to -1.5 in favor of the Chiefs, which is not a vote of confidence for a team that is hosting a playoff game.

Many are still betting on the Kansas City Chiefs to not only make it to Super Bowl LVI, but win it. So, why are the Bills pulling so close to even with the potential NFL champs?

Have a look at the latest Super Bowl 56 futures – Buffalo is coming in right behind KC, with the winner of this game expected to make it all the way to the big game on February 13th.

If the above projections prove to be accurate, this game between the Bills and Chiefs serves as an unofficial AFC Championship Game as the NFL odds are suggesting that they are the top two teams in the American Football Conference this season.

Watch for these futures odds for Super Bowl betting to shift considerably after this weekend’s four games conclude. Narrowing a field down from 8 to 4 teams would cause this to occur naturally, as there are less options on the board up for consideration.

When we say shift considerably, we mean that the winner of the Chiefs vs. Bills could end up leap-frogging the Green Bay Packers (assuming GB gets beyond the 49ers on Saturday night), especially if Kansas City is victorious.

The odds for betting on the Green Bay Packers to win Super Bowl LVI are only 50 points higher than the moneyline posted for the Chiefs.

Keep that in mind when considering whether or not to lay any action on these Super Bowl 56 betting futures, as the potential payouts will be much lower for those who wait.

For instance, NFL bettors that believe the Buffalo Bills will continue onward and win Super Bowl LVI can earn $5.50 for each $1 wagered upon that outcome’s +550 moneyline if Josh Allen and company hoist a Lombardi Trophy in SoFi Stadium.

If Buffalo beats Kansas City on Sunday, their NFL moneyline odds will decrease by at least 200 points, which will reward Super Bowl bettors $2 less per $1 wager for the exact same outcome.

That’s why it pays – literally – to call your shots early and lay some action on Super Bowl LVI odds sooner than later. Good luck this weekend!