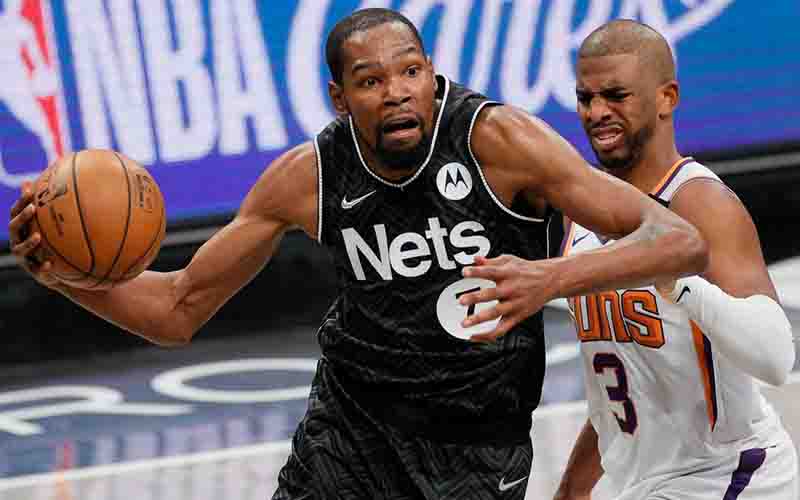 The current NBA Playoff picture odds illustrate a path to the 2022 Finals that places the Brooklyn Nets on a collision course with the Phoenix Suns who have clinched the best record in the West.

This has been the projected route to the NBA Finals for several weeks even though the Nets have yet to eclipse the 8th overall ranking in the Eastern Conference.

NBA teams that finish between 7 and 10 in each conference must participate in the play-in tournament where the higher-ranked seed can advance to the playoffs with a single win, and the lower seed can enter the postseason tournament by winning two games.

If the NBA season ended today, the Brooklyn Nets would finish as the 8 seed and would have to play the Charlotte Hornets in order to make the final 2022 playoff bracket.

A single win against Charlotte would jettison the Nets into the 8 seed or the 7 if the Cleveland Cavaliers lose two straight play-in games to the Atlanta Hawks.

Common sense then suggests that the Nets would then ouster the number one overall seed in the East – the Miami Heat. The path doesn’t get any easier for Brooklyn as their most likely opponent in the second round, as projected by NBA playoffs betting sites, would be the Boston Celtics.

The beauty of beating a one seed in the first round is that the winning team gets to assume their route to the Finals. That would allow the Nets to avoid facing either the Philadelphia 76ers or the defending NBA Champion Milwaukee Bucks in the second round.

The Eastern Conference Finals, if Brooklyn makes it, would almost certainly pair them against either Milwaukee or the 76ers, and one cannot deny the intrigue presented by the Nets facing a Philadelphia squad that is led by their former teammate, James Harden.

Harden was traded to the 76ers from Brooklyn earlier this season, breaking up the Big 3 for the Nets without ever capturing championship glory.

The fact that James Harden is no longer a member of the Nets only adds to the oddity of Brooklyn still retaining the top odds for NBA betting in the Eastern Conference.

Pro basketball bookmakers have been leaning on the expectation that Kyrie Irving would return to full-time playing status once New York City lifted its COVID-19 mask mandate.

Irving is no longer limited to only participating in road games for the Nets now that NYC’s mask mandate has been lifted, but is it too little, too late?

NBA betting sites don’t think so and still indicate they will lose to the Pheonix Suns in the 2022 NBA Finals after making a seemingly impossible run through the postseason.

The NBA futures odds place the Suns as a heavy favorite to win it all in 2022 with a 250 point advantage in the moneyline over the Brooklyn Nets’ odds.

All of the above NBA odds will payout at least 3-to-1, and we can’t help but notice the Bucks and their enticing +650 moneyline and observe how long they are for a defending champion that is entering the playoffs at full strenth.