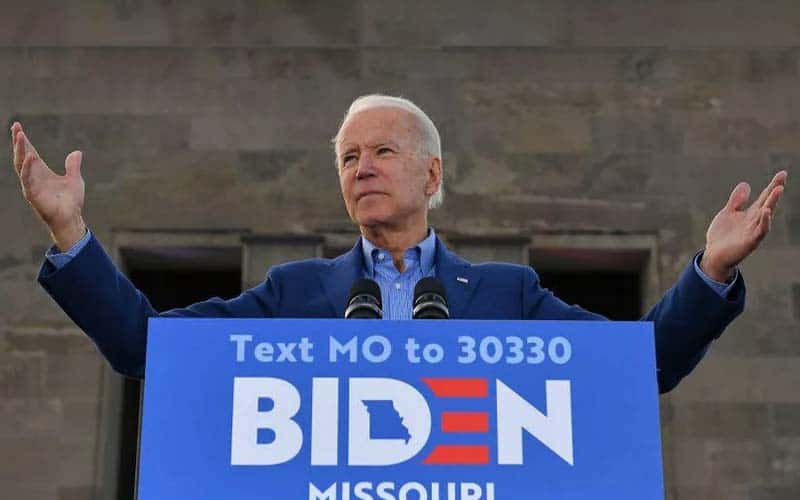 When voters in six states head to the polls for tomorrow’s Democratic primaries, there’s a strong chance they’ll drink a cup of Joe and not feel the Bern.

Former Vice President Joe Biden is favored to pull off a clean sweep and win each of the six state primaries voting on Tuesday, March 10, according to the betting odds at Bovada Sportsbook.

The 2020 Democratic presidential race is down to Biden and Vermont Sen. Bernie Sanders following the results from Super Tuesday.

Even though Sanders was the heavy favorite heading into the Super Tuesday primaries, Biden, as the underdog, managed to pull off upsets in four states—Maine, Massachusetts, Minnesota, and Texas.

After the dust settled from Super Tuesday, Biden won 10 of the 14 states up for grabs on March 3 and took a 652-to-575 pledged delegate lead over Sanders, according to the latest delegate count from NBC News.

With 1,991 pledged delegates needed to secure the 2020 Democratic presidential nomination, Biden will look to extend his lead even further while Sanders must begin to close the gap to give himself a shot at a comeback.

Michigan, unquestionably both candidates’ most important state to win for the March 10 primary elections, will award the most delegates (125), followed by Washington (89), Missouri (68), Mississippi (36), Idaho (20) and North Dakota (14).

Based on the legal political betting odds for the March 10 Democratic presidential primaries, the oddsmakers predict Biden will outright win each of tomorrow’s contests.

Idaho, North Dakota, and Washington are the states that oddsmakers feel Sanders has a relatively close chance to win. At the same time, Michigan, Mississippi, and Missouri are projected to be massive blowout wins for Biden.

Biden’s odds to win the 2020 Democratic presidential nomination hit an all-time high following his big wins on Super Tuesday. And since then, the former VP’s chances of facing Donald Trump in the general election have only continued to increase.

Currently, Biden is listed at -800 odds at Bovada. This means an $800 bet would win $100 if Biden can hold over Sanders and win the nomination.

Sanders is listed at +650 and a distant second ahead of the March 10 primaries. However, if you think the Vermont senator will put on the rally cap and come back to win the nomination, then a $100 wager will payout $650.

Lastly, if the oddsmakers are correct and Biden wins all six states on Tuesday, then his nominee chances will drastically increase, but the potential payout will be substantially less. The opposite is true for Sanders, who may see his odds plummet off a cliff after tomorrow’s contests.