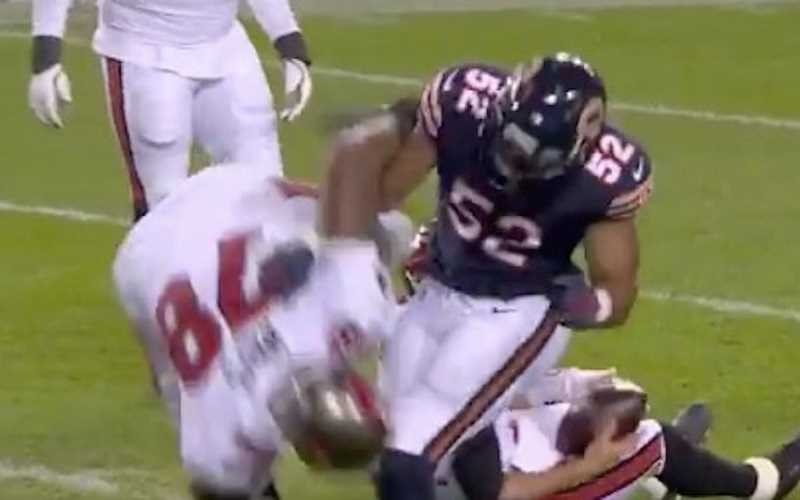 Nick Foles is back, and appears to have some magic left in the tank as his Chicago Bears are now 4-1 after handing Tom Brady and the Tampa Bay Buccaneers their second loss of the season.

The Bears were predicted to lose by 4 points, and were able to not only cover, but outright win the game behind the aggressive efforts of Khalil Mack and the Chicago defense.

At one point, Mack was held by Buccaneers tackle Tristan Wirfs for the entire play, and still ended up sacking Brady. After the play, Wirfs continued to hold Mack. This resulted in Mack hip-checking Wirfs and flipping his 6’5”, 320 lb frame head-over-heels and onto his back.

The professional wrestling style move was a microcosm of how the Bears handled the Buccaneers last night.

NFL betting enthusiasts that laid some action on the Bears and their money line odds of +185 took in a nice haul to the tune of 1.85x of the amount they risked.

Last weekend’s slate of games had to be altered due to COVID-19 infections occurring amongst the players and personnel of the Tennessee Titans and the New England Patriots.

Week 5 is no different, as two games have already been moved due to more teams experiencing difficulties containing the spread of the Coronavirus.

Here’s what we know about the Week 5 NFL schedule so far:

COVID-19 complications have already caused one game to be shifted in the NFL’s week 6 schedule, according to a report from CBS Sports. Those details are as follows:

That’s a whole lot of moving around for the league’s front office to handle. There is concern that any further alterations may force games to be canceled outright, which will certainly impact the NFL Playoff betting odds.

There are formulas in place to resolve any schedule discrepancies, and the inclusion of an extra playoff team to the 2020-21 postseason should allow for any franchises that have experienced “bad luck” due to game cancelations to remain in contention, but there is the potential for a team to be excluded due to COVID-19-related circumstances.

At this early juncture in the 2020-21 NFL season, it is already clear that the league is having much more trouble with containing virus contagion than the NBA, who is preparing to complete their season as early as tonight.

There are two reasons for that. The first is that the NBA conducted their entire season inside of a bubble, containing all teams, players, and staff in Orlando, Florida, restricting their ability to travel and limiting their exposure.

NBA Basketball also has the benefit of much smaller rosters, with 15 traveling players per team compared to the NFL’s 48.

The league cannot feasibly reduce roster allowances, so perhaps it should consider adopting a bubble policy before game postponements and cancelations get out of hand.