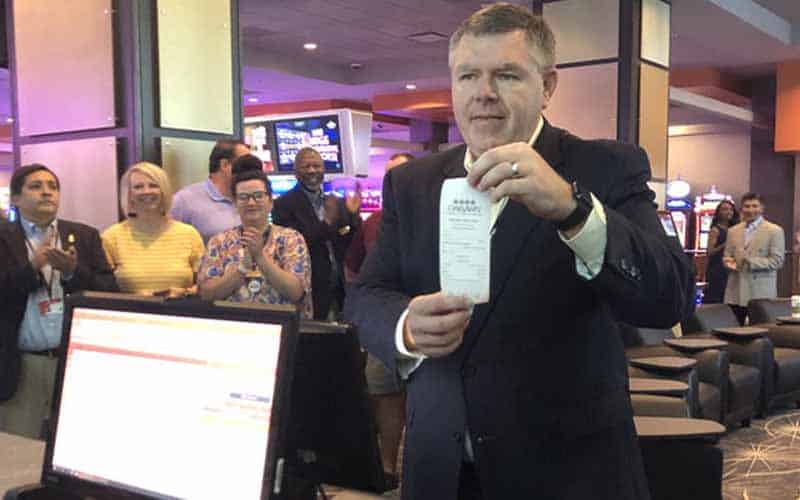 Oaklawn was approved by the Arkansas Racing Commission in June to launch its sportsbook, which had set a tentative start date scheduled for Monday, July 1.

How Did Oaklawn Get A Sportsbook?

During the 2018 midterm elections, residents of the state voted 54.1% in favor of Issue 4, a ballot measure that amends the state constitution and authorizes the state’s racing commission to issue gambling licenses — which includes sports betting — to Arkansas casinos in four counties.

Oaklawn and Southland Casino Racing — formally Southland Park Gaming and Racing — were explicitly mentioned in the bill to be eligible for sportsbook licenses at their locations in Garland and Crittenden, respectively.

Oaklawn becomes the first to launch in the state while Southland, owned by Delaware North, does not currently have an opening date set for its sportsbook.

Two more counties, Jefferson and Pope, are allowed to have a casino offering sports betting and gambling, but the racing commission has yet to approve an applicant for either location.

Now that the Natural State offers sports betting at Oaklawn’s Race & Sports Book, here’s everything residents and visitors need to know before placing a real-money wager on sports in Arkansas.

When can I start betting in Arkansas?

Oaklawn opened its sportsbook on Monday, July 1, and you can place a wager with any of the tellers, who will be available from 10 a.m. to 10 p.m. CT every day. You can also bet at kiosks when the casino opens at 8 a.m. until closing time at 4 a.m. Sunday through Thursday and until 6 a.m. on Friday and Saturday.

What’s the age requirement to bet on sports?

You must be at least 21 years old to bet real money on sports at Oaklawn or the three pending casinos in Arkansas.

Who regulates sports betting in Arkansas?

The Arkansas Racing Commission is the sole authority on sports betting and gambling in the state and is responsible for issuing licenses to eligible applicants and maintaining the rules and guidelines for the casinos.

How many bet types are at Oaklawn?

Oaklawn has begun its $100 million expansion on the Hot Springs property, which will add over 28,000 square feet to its casino floor for additional space to offer gambling and sportsbook. It’s unknown at this time whether this will include more bet types.

What sports are available for action at launch?

All of the most significant sporting events will be featured at Oaklawn and the TBD sportsbooks. Here is a list of the sports and leagues available at launch.

Does Arkansas have online/mobile betting apps?

No. Sports betting was only authorized at four land-based (also known as brick-and-mortar) casinos in the amendment to the state constitution.

Because online and mobile betting apps were not mentioned in the Issue 4 ballot measure, the General Assembly and state voters would need to approve another amendment before either would be allowed.

Is the state collecting tax revenue from sports betting?

Who benefits from the tax revenue?

Funds generated from the casino’s tax revenue will be distributed to the following:

Could more states join Arkansas in 2019?

Most states that have signed bills into law are expected to launch before the 2019 NFL and college football season kicks off — two of the most wagered on sports leagues in the US.

Illinois, Iowa, Indiana, Montana, New York, and Tennessee have all legalized some form of sports betting and are expected to launch in 2019.

Additionally, Washington DC could offer a sportsbook this year, but 2020 is looking more likely. New Hampshire and Maine both have bills sitting on the governor’s desk right now while Colorado will allow voters to decide on the ballot this fall.

Lawmakers in California also announced they would be introducing a sports betting bill in the current legislative session and hope to have it on the ballot for the 2020 general election.