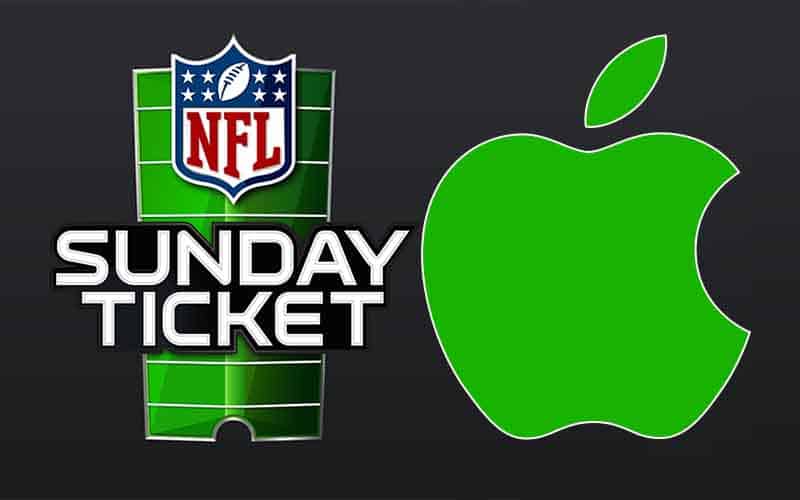 Last December, online NFL sportsbooks produced odds on the entity that would secure the next NFL Sunday Ticket contract following the expiration of their deal with satellite television provider DirecTV.

Ten months ago, it appeared as if Disney/ESPN/ABC was the front-runner according to the betting futures.

Although the above NFL prop bet is no longer posted online, wagers that were placed last December are still waiting for the final word on which company will become the new host of Sunday Ticket.

NFL Commissioner Roger Goodell declared in July that an announcement regarding the Sunday Ticket package would be made in the fall, so an official statement should be delivered in less than 90 days.

Current rumors now place Apple as the lead dog in the hunt for the NFL’s elusive package. Apple TV’s +1000 NFL moneyline placed them below online pornography providers in the likelihood of inking a deal with the NFL, but entertainment betters who laid some action last December may end up having the last laugh.

Sunday Ticket’s current vendor, DirecTV, is listed in the above odds as the seventh most likely to win with a +600 moneyline, but their performance over the first four weeks of the 2022-23 NFL season has been poor with numerous outages.

DirecTV has already notified subscribers who experienced technical difficulties that they will receive pro-rated refunds, not a good sign for a company trying to make an impression on Roger Goodell and the National Football League.

LOL…#SundayTicket gave me an $11 refund for two weeks of non-service. What a scam. https://t.co/3b1HOlsDQW pic.twitter.com/Ehla2GjRcU

The current package costs between $293 and $396 per season depending on if subscribers opt for the NFL Redzone/DirecTV Fantasy Zone upgrade, delivering coverage of all regular season Sunday afternoon games to televisions around the country.

Unless you live in an area that is not supported by DirecTV, an NFL Sunday Ticket subscription also requires satellite equipment. This exclusivity is in direct contrast to other major professional sports leagues that make their product available over a multitude of cable, satellite, and streaming services.

It is highly unlikely that NFL season packages will fall to rates below $200 annually, especially with the league’s $2.5 billion per year asking price.

However, it is not unreasonable to hope that the host could deliver package breakdowns that allowed for single-team subscriptions,  monthly allowances, or perhaps single-game purchases.

“I clearly believe we’ll be moving to a streaming service… I think that’s best for consumers at this stage.”

The real losers in this equation are the thousands of sports bars across the United States that will be saddled with useless satellite equipment and no ability to attract pro football fans as customers on Sunday afternoons.

Fans and bettors will be enjoying games on their smartphones, tablets, and smart TVs and will no longer need to venture out to a smoky wing joint just to watch their favorite NFL franchise.

Some will gripe, but we call that progress here at SBL. Stay tuned, as commissioner Goodell should be naming a new NFL Sunday Ticket provider within the coming weeks.