Antonio Brown timeline: The good, the bad, and how the Patriots became the Super Bowl favorites 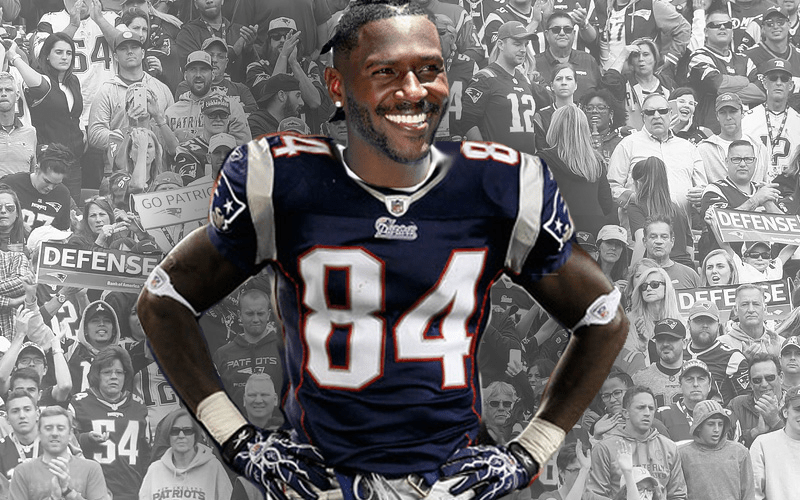 It looks like no one told the Oakland Raiders and Antonio Brown that summer camps were reserved for love.

Since being traded from the Pittsburgh Steelers to the Raiders for a couple of draft picks, Brown’s offseason has been one to remember.

After a tumultuous few months in the Bay Area, where he most recently clashed with the team’s coaching and management staff, the seven-time Pro Bowl wide receiver has officially signed with the New England Patriots.

Brown might be happier now, especially since his new team—the New England Patriots—has the best chance to win Super Bowl LIV at +425 odds.

A timeline is below, paired with Brown’s corresponding social media posts, to keep the entire debacle in order.

Pittsburgh trades Brown to Oakland for third- and fifth-round draft picks at the start of the 2019 NFL offseason.

Brown takes issue with the NFL’s new required helmets. The receiver even threatened to retire if he couldn’t use his old helmet and accused quarterbacks Tom Brady and Aaron Rodgers of breaking of the rule. Brown even tried to sneak his old helmet into practice, painting it to match the mandated lids. It didn’t work.

The Raiders place Brown on the non-football injury list for, in what may be a first for the NFL, frostbitten feet. Brown took to his Instagram story to share the blistered aftermath. The Raiders fine Brown $53,950 for missing mandatory team practices and threaten to levy more “should [Brown] continue to miss mandatory team activities.” After receiving the letter, Brown returned to Instagram to share the letter with his followers. 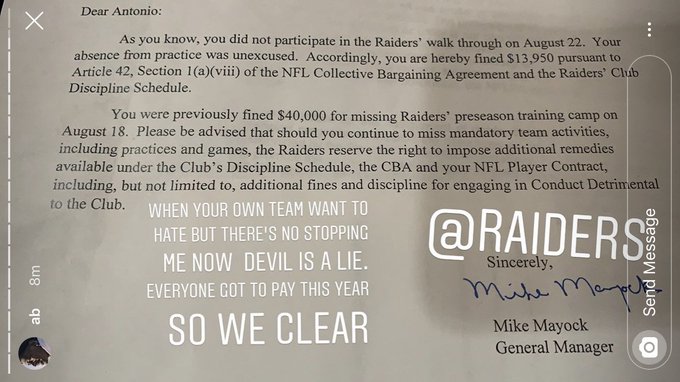 Following his Instagram post, Brown confronts Raiders GM Mike Mayock during practice. According to a Raiders source, Brown called Mayock a “cracker” and threatened to punch him.

After the exchange, the Raiders were expected to suspend Brown for their Monday Night Football home opener against the Denver Broncos.

Head coach Jon Gruden tells reporters that Brown will be playing for the team in Week 1 after he apologized to the team for his antics.

After not getting suspended, Brown posts a video to his YouTube featuring a phone call between him and Gruden.

“Please stop this shit and just play football. How hard is that? You’re a great football player. Just play football,” Gruden says towards the end of the black-and-white video.

Saturday morning, Brown made his last Instagram post as a Raider: “You are gonna piss a lot of people off when you start doing what’s best for you.”

And that’s fine ! I have worked my whole life to prove that the system is blind to see talent like mines.Now that everyone sees it, they want me to conform to that same system that has failed me all those years. “I’m not mad at anyone. I’m just asking for the freedom to prove them all wrong.” Release me @raiders #NOMore #theyputblindersonahorseforareason #NoMoreFake

Subsequently, the Raiders release Brown, fined him another $200,000, and voided $29.125 million of his guaranteed money.

How the Pats became the Super Bowl favorite

Later that evening, Brown announces on Instagram and Twitter that he was signing with the New England Patriots.

As a result of the signing, the Patriots odds to win Super Bowl LIV jumped to the top spot at +425—a 19.05% chance of repeating as champions. For more information for how to bet on pro football, check out our NFL betting guide.

Prior to the Brown acquisition, the Patriots were second at +650, giving Brady’s bunch a 13.33% chance to win, and were behind only the Kansas City Chiefs, who were +550, or a 15.38% chance, according to the Super Bowl odds before Week 1.

For a full comparison of this season’s Super Bowl odds, a list is provided below. Sadly for the Raiders, their odds remain low at +10000.