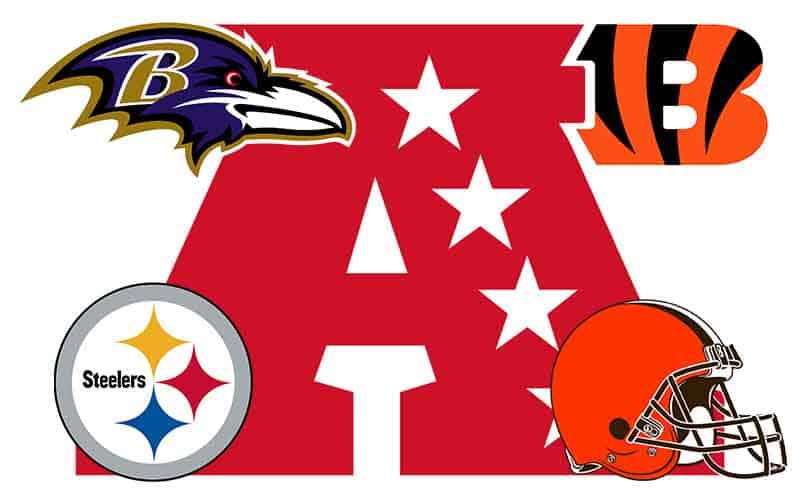 The AFC North is typically a battle between the Steelers and Ravens for the division crown, but a renaissance at quarterback in Pittsburgh has skewed the projections heading into the 2022-23 NFL season.

Below is our AFC North betting preview, with division futures listed next to each team’s name in the order of Bovada, MyBookie, and BetUS. BetOnline is undergoing maintenance and is expected to relaunch its website soon. Otherwise, we’d have included BetOnline’s AFC North futures as well.

Former NFL MVP Lamar Jackson will be among the starting offensive lineup come Week 1, and the Ravens’ fate largely depends upon his health and performance. Baltimore holds a slim lead in the AFC North odds to win, with most of their credit being earned on past performance.

The current reality suggests that the Ravens’ roster does not stack up well against the Bengals, but perhaps Baltimore can simply outlast Cincinnati when they eventually experience a setback which seems to happen every year.

Betting on the Baltimore Ravens may seem like the safe bet to win the division at the moment, but come mid-season, they could be among the middle of the pack.

After losing Super Bowl 56 to the Los Angeles Rams, the Cincinnati Bengals hit the free agent market hard to shore up their offensive line for another championship run. The Bengals’ front office is all in on this season because they need to win a Lombardi before Joe Burrow and Ja’Marr Chase sign their second contract and deplete the payroll.

We like the odds for betting on the Bengals and feel that they are the class of the AFC North in 2022-23.

The Browns have signed troubled QB Deshaun Watson, who is currently facing a lengthy suspension that will likely derail any playoff plans in Cleveland. Because they are loaded with talent on offense and defense, we expect the Browns to exceed expectations but fall well short of an AFC North title unless Watson’s suspension is reduced significantly.

The Steelers are now looking to replace Ben Roethlisberger after his retirement during the offseason. Pittsburgh will remain consistent and could even experience success this season, but with Mitch Trubisky at quarterback, we’re not laying any action on that prospect.

We’d like to see rookie quarterback Kenny Pickett inserted into the lineup sooner than later. Pickett is currently third on the depth chart, indicating that the Steelers will need to lose a few games before he will see any action.

If you intend to bet on the Pittsburgh Steelers to win the AFC North, keep your expectations and the amount of your wager very low.