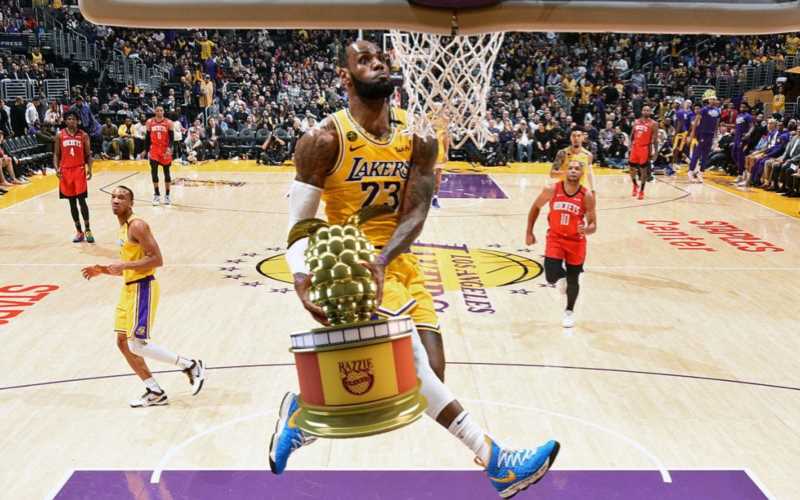 Two years ago, at the height of the coronavirus, the 2020 Razzies were delayed and then basically canceled. While the Razzie nominees and winners were still announced, the show itself was relegated to an online-only presentation that lacked all the kitsch of the typical in-person production.

Right now, only MyBookie Sportsbook has published odds for the 42nd Golden Raspberry Awards, though we expect other legal online sportsbooks like Bovada and BetOnline to post up their own Razzie betting lines before the show airs on March 26.

With what we can only hope is much, much further adieu:

We didn’t see any of these.

“Diana the Musical” is probably about the aptly named Princess Di and is nearly as annoying as the interruption in programming we experienced during SNL that one night way back when the show was still good.

“Space Jam 2” is probably as awful as the original, so it’s unlikely to have succeeded in establishing any sort of new legacy.

“Karen” is probably about your next door neighbor. Remember that the camera adds 100 pounds.

“Infinite” is probably a movie.

“The Woman in the Window” is probably not as good as the Alfred Hitchcock-Jimmy Stewart vehicle it’s not based on.

That’s all we know.

LeBron all the way. That guy’s a scrub no matter what he does.

It’s about time somebody other than Ken Keeler dunks on him:

Two weird thumbs down for the lot of them.

Coke is a dumb name. We’ll go with that.

“Twist” should win, if for no other reason than it really missed the mark. The new script pretty much completely ignored the Michael Crichton source material.

Mel Gibson for sure. Hollywood hates the guy with a…passion.

We’ve never heard of a single one of these people.

All of the above.

To give you an idea of the kind of stuff that usually wins Razzies, taking stock of the winners of last year’s 41st Golden Raspberry Awards (announced April 24, 2021) could be just the edge you need if it’s your first time betting on the biggest losers.

Note, of course, that any conservative-leaning personality, movie, or documentary will always be high on the list to win these things (see Mel Gibson above).

So, in addition to shaming straight-up bad art, the Razzies also play the typical Hollywood game of trashing the political right whenever it can.

For example, at the 2019 Razzies, Donald Trump won the Razzie for Worst Actor because a couple of lazy cash-grab documentaries – “Death of a Nation” and “Fahrenheit 11/9” – were hastily slapped together about the then-President and his radical agenda of low unemployment rates and reasonable gas prices.

That kind of thing plays pretty fast and loose with the categories, but it’s something to keep in mind.

While these shenanigans shouldn’t play much of a role in the 42nd Golden Raspberry Awards thanks to most recent political documentaries being about Hollywood-friendly COVID profiteers, you might find those creeps hoisting their own Razzies a few years down the road once the world recovers and looks back on the last 30 months or so from behind something less than rose-colored glasses.

Or, perhaps, Vladimir Putin and Russia will just sweep the next 10 Razzie ceremonies.