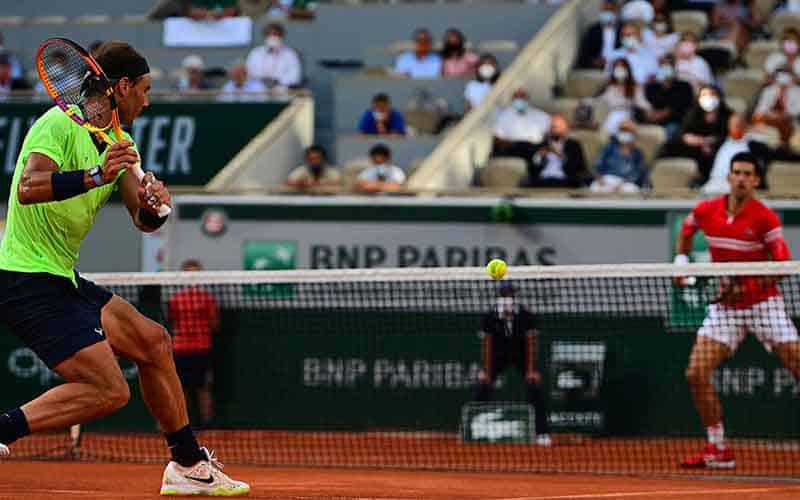 No other professional tennis player has won as many men’s French Open titles (13), or as many Grand Slam Championships (21) as Rafael Nadal. He is looking to extend that number to 14 and 22 this afternoon, but a juggernaut stands in his way.

Novak Djokovic is the top-ranked men’s tennis player on the planet and the reigning 2021 French Open Champion. Despite Nadal’s unmatched level of success at the French Open and on clay courts, Novak is heavily favored to win with a moneyline that requires $2.40 worth of risk just to net a dollar.

The above French Open betting line and the advantages contained therein for Djokovic are largely due to a lingering foot condition that has plagued Nadal. Tennis betting sites are granting Novak a -4.5 game spread advantage despite the many common factors listed in the tale of the tape below.

Rafael Nadal vs. Novak Djokovic Tale Of The Tape

If Novak Djokovic can get beyond Nadal in this afternoon’s quarterfinal men’s matchup, he’ll be one step closer to earning his 21st Grand Slam Championship – tying Rafael in his own backyard.

Djokovic is the odds on favorite to win at many of the tennis betting sites that are included in our list of online sportsbook reviews, but Nadal is coming in third out of all eight remaining men’s contenders.

Because of regional COVID-19 regulations, Djokovic was not allowed to enter Australia and participate in the 2022 Australian Open, a Grand Slam he was favored to win.

That should’ve been Novak’s record-tying 21st Grand Slam title, but instead, the stage is set for a showdown of the ages in the realm of men’s tennis when Nadal vs. Djokovic goes down.

No matter who is victorious this afternoon, it is highly probable that they move on to win the French Open and will then have a chance to extend their lead on the other at Wimbledon when it begins on June 23rd.

The odds for betting on Wimbledon are already posted on the boards at online tennis sportsbooks. Novak is the dominant favorite to win Wimbledon in 2022 but Nadal is still featured in the top 3 overall players.

The women have also reached the quarterfinal round of the French Open with Iga Swiatek leading the way in the below tennis futures.

Swiatek survived a scare yesterday against teenage Chinese phenom Zheng Qinwen when she lost the first set 6-7. Iga then went on to easily win the match when Zheng succumbed to cramps that left her at less than 100%.