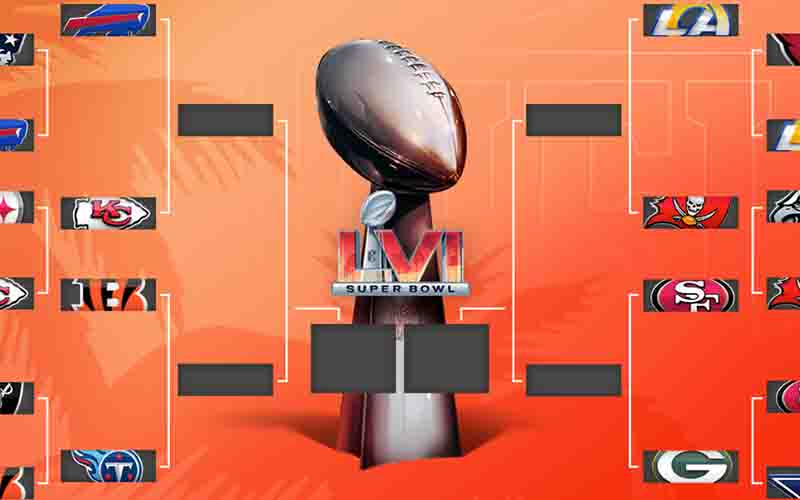 Another full weekend of NFL Playoff betting gets started this Saturday at 4:30 PM to kick off the 2021-22 divisional round. Just like during Super Wild Card Weekend, all of the home teams are favored to win.

However, each matchup offers close NFL point spreads, indicating that all four games have the potential to go down to the wire. Here’s our take on how the 2021-22 NFL Playoffs Division Round will go down.

While the Titans may have received the AFC’s only bye week, they are now only a three-point favorite at home against the Bengals. Star running back Derrick Henry has been cleared to return to practice after being out for weeks due to injury, and the lack of certainty regarding his availability for Saturday has kept the Titans vs. Bengals odds close.

It is called gambling for a reason. Choose whether you think Henry will play today and bet accordingly.

Closing out Saturday evening is an epic pairing of historic NFL franchises with a trip to the NFC Championship Game on the line. The #1 Green Bay Packers will host the San Francisco 49ers at Lambeau Field where snowy conditions are forecast with a wind chill of around zero at 8:15 PM.

Betting on the Green Bay Packers and their point spread will require granting the 49ers two field goals, but is that a smart wager? San Francisco is coming in hot, beating the Los Angeles Rams and the Dallas Cowboys in the last two weeks.

The 6 point spread is the largest of the weekend, and while it may first appear like an easy cover, beware the fact that the 49ers are at full strength and made it to Super Bowl LIV just 24 months ago with a similar lineup.

At 3:00 PM on Sunday afternoon, Matt Stafford and the LA Rams have a chance to knock off last year’s Super Bowl Champion Tampa Bay Buccaneers at Raymond James Stadium.

The Rams are 3 point underdogs this weekend, and most folks are betting on the Buccaneers to reach at least the NFC Championship Game, so keep that in mind when considering laying some action on LA.

The Buffalo Bills will attempt to avenge their loss to the Kansas City Chiefs in last year’s AFC Championship Game this Sunday at 6:30 PM in Arrowhead Stadium.

The 2.5 point spread is the slimmest margin of the weekend, and it is difficult to go all-in for betting on the Kansas City Chiefs considering how dominant the Buffalo Bills have been playing.

During Wild Card Weekend, the Bills trounced the usually fundamentally sound and well-prepared New England Patriots by a final score of 47-17. Can Buffalo carry that momentum into Sunday night?