Who’s favored to drop out of the 2020 Democratic race? 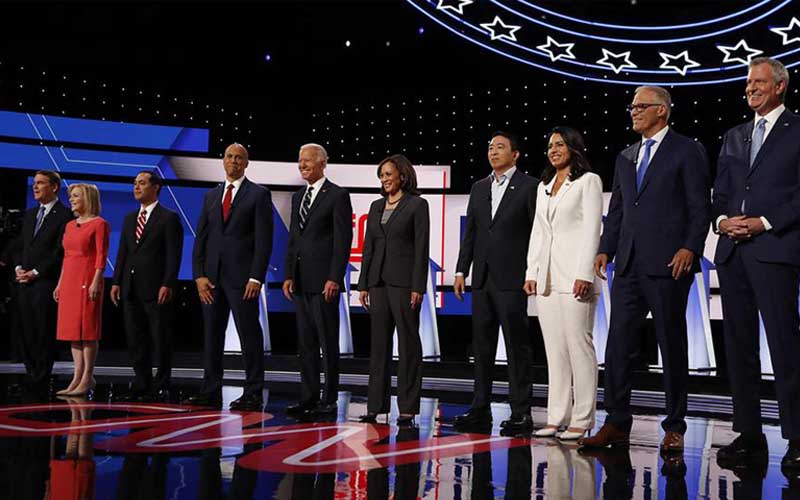 You don’t need to be Freddie Mercury to see that a bunch of the 2020 Democratic candidates are about to bite the dust.

Oddsmakers at BetOnline have decided to weigh in and have released political prop bets on which candidates will be next to drop out as well as pitting certain candidates against each other in “drop out” matchups.

With the threshold for the next debates increasing — 130,000 individual donors and 2% in four qualifying polls (from June 28 to August 28) are required — the massive field of those running for president is about to get cut down significantly.

Here’s who have met the requirements for the September 12 debate. If more than 10 candidates qualify, then the field will split, and another debate will take place on September 13. The candidates are:

According to The New York Times, Andrew Yang and Julián Castro have met the donor requirement and need one more qualifying to make the third debate, and vice versa is true for Amy Klobuchar.

Outside of those 10 candidates, Tom Steyer, Tulsi Gabbard, and John Hickenlooper could potentially crack into the third debate field, but need at least 2% in more than one or two qualifying polls.

With those names in mind, let’s see what the latest odds say.

Which candidate will be next to drop out?

Bill de Blasio is favored to be the next candidate to take a seat beside the already forgotten Eric Swalwell, who dropped out after the June debates. John Hickenlooper and Michael Bennett are narrowly behind the New York City mayor, according to the odds from the prop bet.

All five candidates, however, have a lot of ground to make up when it comes to meeting the requirements for individual donations and qualifying polls and are excellent candidates to be the next to drop out of running for president.

Both Kirsten Gillibrand and Tulsi Gabbard had strong performances during Night 2 of the debates. However, based on the 2020 odds boost that Gabbard got last night, plus having less of an uphill battle ahead of her when it comes to making the next debate, it makes sense that Gillibrand is favored to be next on the chopping block between the two.

It’s hard to believe that Beto O’Rourke was once the Democratic favorite alongside Kamala Harris, but his fall from grace, and from standing on tables, has not been pretty. Julián Castro has made a name for himself in both debates and appears to be on an upswing.

Castro still needs to qualify for the third debate, which is why he may be favored to drop out before O’Rourke. Plus, something tells me O’Rourke will stay in far too long while Castro will humbly bow out when the time comes.

This is another tough one because both candidates had very strong performances in Night 2. Cory Booker has qualified for the next debate, but Andrew Yang hasn’t yet. However, the Democratic nomination odds heavily favor Yang over Booker at the moment, and it’s not even close.

Something tells me Booker is similar to O’Rourke in that he’s going to stay in until the bitter end while Yang will gracefully accept defeat. Yang has said he’s staying in until the end, but it’s also likely Booker packs it up early and focuses on a run later (he got an endorsement from Biden last night, after all).

That may be thinking of the oddsmakers with this one, but honestly, this prop is too close to call and could probably be determined with a flip of the coin.