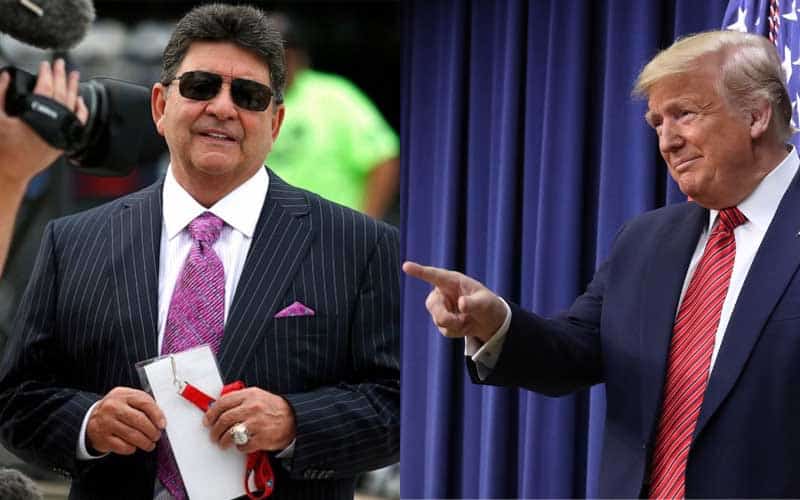 DeBartolo pleaded guilty in 1998 on the felony charge of failing to report a felony in a bribery case involving then-Louisiana Gov. Edwin Edwards.

During his testimony, DeBartolo said Edwards extorted $400,000 from him in exchange for his help to secure a riverboat casino license in the state.

For not reporting the bribe, DeBartolo was sentenced to two years’ probation and fined $1 million. Edwards was convicted of conspiracy, extortion, and racketeering and served nearly eight years in prison.

Today, the teams he assembled in the 1980s and 1990s are considered to be apart of one of the greatest dynasties in NFL history. As a result, DeBartolo was inducted into the Pro Football Hall of Fame in 2016.

After the year-long suspension, he gave ownership of the 49ers to his sister, Denise DeBartolo York, in 2000, and his nephew, Jed York, currently manages the team.

Trump’s pardon was announced by White House officials at an impromptu press conference outside the West Wing. Hall of Famers Jerry Rice, Charles Haley, Ronnie Lott, and Jim Brown were in attendance and had previously met with Trump about DeBartolo receiving a presidential pardon.

“Eddie was like that 12th man that was on that football field. You know that this guy, you know, he wanted us to win. And I think he’s the main reason why we won so many Super Bowls,” Rice said. “Today is a great day for him. I’m glad to be here and be a part of that. And, you know, it’s just something I’ll never forget. You know, this man, he has done so much in the community, he has done so much in NFL football.”

“I take my hat off to Donald Trump for what he did,” Rice added.

“I’m going to make it real simple: Ed DeBartolo is a great man,” Brown said, adding that the former 49ers owner is “a great, great friend of mine and to the league.”

Today’s announcement is sure to fuel speculation for whether Trump will continue to push for Pete Rose, the all-time MLB hits leader, to be inducted into the Baseball Hall of Fame.

Rose is currently banned for life for betting on MLB games, specifically his own team, while playing and managing the Cincinnati Reds.

Although Rose was never charged with crimes relating to sports betting, Trump less than two weeks ago vouched for Charlie Hustle on Twitter, stating, “GET PETE ROSE INTO THE BASEBALL HALL OF FAME. It’s Time!”

Pete Rose played Major League Baseball for 24 seasons, from 1963-1986, and had more hits, 4,256, than any other player (by a wide margin). He gambled, but only on his own team winning, and paid a decades long price. GET PETE ROSE INTO THE BASEBALL HALL OF FAME. It’s Time!

Online sportsbooks haven’t released odds for whether Rose will be inducted into the Hall of Fame while Trump is in office, but there’s a decent chance we’ll see that betting line soon after today’s pardon.

For now, it looks like Trump is more than likely going to win a second term in office. According to the political betting odds at Bovada Sportsbook, Trump’s reelection odds are favored at -170, meaning a $170 wager would win $100 if he wins the 2020 general election on Tuesday, November 3.