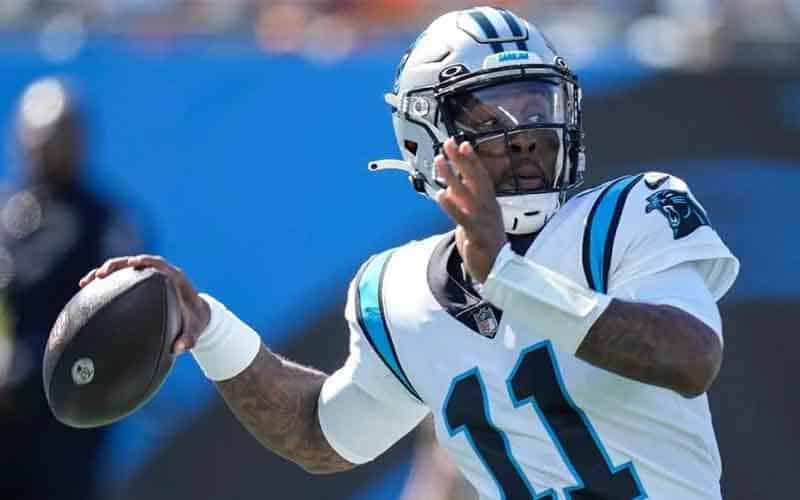 The Carolina Panthers are in the middle of a rebuilding year where they’ve fired their head coach and traded away arguably the best running back in the league, Christian McCaffrey.

Sam Darnold was expected to run the Panthers’ offense this year but suffered an ankle injury in the preseason that still has him on the shelf.

2022 third-round draft pick, Matt Corrall from Ole Miss, has also been unavailable since being placed on the injured reserve list after hurting his foot during a preseason practice session.

Carolina traded for Cleveland Browns for QB Baker Mayfield to solve their quarterback crisis, but his performance has been lackluster in 2022.

This is Walker’s third season with the Carolina Panthers following his time with the Houston Roughnecks, a team that was 5-0 and running rampant through the short-lived XFL back in 2020.

PJ was able to lead the Panthers to two consecutive victories in 2021-22 but was supplanted in the lineup when the team signed Cam Newton, who promptly lost most of their remaining games.

On this evening’s edition of Thursday Night Football, NFL betting sites are granting the visiting Atlanta Falcons a -2.5 advantage in the point spread. If those projections hold true, this could be Walker’s last chance to hold the starting quarterback position for Carolina.

PJ would have probably already wrapped up the job for the season if not for their loss to the Falcons in Week 8. Walker and the Panthers’ offense scored a game-tying touchdown in the closing seconds, but wide receiver DJ Moore removed his helmet after the play, resulting in a 15-yard penalty.

That unsportsmanlike conduct penalty was applied to the extra point attempt, which sailed off course and sent the game into overtime. Walker once again put the team in scoring position, only to have kicker Eddy Pineiro miss a routine 33-yard game-winning field goal.

The win would have created a four-way tie in the NFC South, with all teams sporting a 3-5 record and the Panthers sitting in first place.

Tonight, Walker is playing for his Panthers career, but after last weekend’s 42-21 loss to the Cincinnati Bengals, he will be on a short leash.

The below NFL prop bets have been produced that grant insight into Walker’s potential performance.

Who will have more Passing Yards in the game?

Marcus Mariota is known as much for his running as he is for his ability to pass, but Walker is no slouch when executing a quarterback keeper. Walker is favored to pass for more yards than Mariota tonight and has the potential to reward gamblers with $1 in net profits for each $1.35 risked on that outcome.

Gamblers that are familiar with XFL betting from back in 2020 already know the talent that Walker possesses. On Thursday Night Football against the Falcons, he has a chance to reveal his skillset to a national audience and secure his starting job.