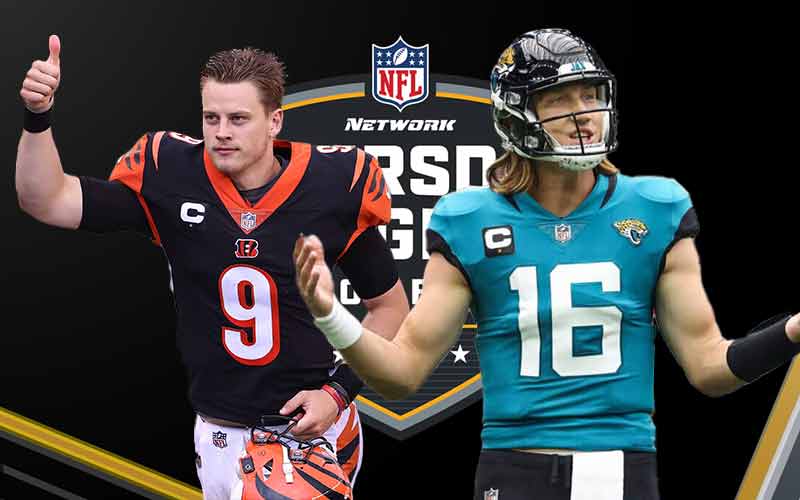 When the NFL first drew up their Thursday Night Football lineup for the 2021-22 season, they probably figured their Week 4 matchup of the Cincinnati Bengals and Jacksonville Jaguars would feature two young quarterbacks seeking to establish a foothold in the league.

While that may still hold true, the paring of an 0-3 franchise vs. an up-and-coming 2-1 squad hardly inspires fans outside of Ohio and Duval County to reach for their remotes and tune in.

Regardless, tonight at 8:15 PM, the Jaguars and Bengals will kickoff at Paul Brown Stadium where NFL betting sites are predicting that Cincinnati will best Jacksonville by at least a touchdown.

Bengals QB Joe Burrow was drafted first overall in the 2020 NFL Draft. His rookie season was cut short due to a major knee injury, and he is making up for that lost time during his second year. Burrow and the Bengals are poised to climb to 3-1 if they can follow through on tonight’s NFL point spread of -7.5, and their head coach’s fate could depend on it.

Jacksonville’s head coach, Urban Meyer, was likely lured to northeast Florida due to the prospect of ushering in the career of rookie QB Trevor Lawrence out of Clemson University.

It seems that all that was necessary was a major collegiate coaching opportunity (USC) and an 0-3 start for the Jaguars to get the rumor mills churning as whispers of Urban Meyer making a quick exit out of Jacksonville continue to echo.

The following NFL prop bet features Urban Meyer as the 3rd most likely pro football head coach to get the ax first during the 2021-22 season, but for some reason, head coach Zac Taylor of the Bengals is coming in right behind him.

NFL Odds For First Head Coach To Be Fired

Taylor appearing in the above prop has more to do with his previous two seasons’ worth of work than it does his current 2-1 status. Including this year’s totals, Taylor has a career record with the Bengals of 8-26-1. With that in mind, it is easy to see why oddsmakers believe he may be on a short leash.

That leash could get even shorter with an improbable loss against Meyer, Lawrence, and the Jaguars at home tonight in front of a national television audience.

While pro football viewers are likely eager to see a few snaps from Burrow and Lawrence, one cannot ignore the overall lack of intrigue involved in this paring of teams.

Perhaps the league should employ some sort of opt-out policy where they can promote a sexier game from Sunday afternoon’s docket and place it into Thursday’s prime time slot when situations like this arise.

The NFL’s rationale for spotlighting their young talent on prime time television is sound, however, even at this early Week 4 juncture in the 2021-22 season, one of the team’s involved is already hopelessly out of contention.

Placing this game in the TNF position for Week 1 would have properly featured Burrow’s return to action as well as Lawrence’s first pro football start.

Of course, Meyer and Lawrence could have the last laugh if they’re able to reel off a victory tonight. If that happens, Zac Taylor could be clearing out his office in Cincinnati as soon as tomorrow morning.