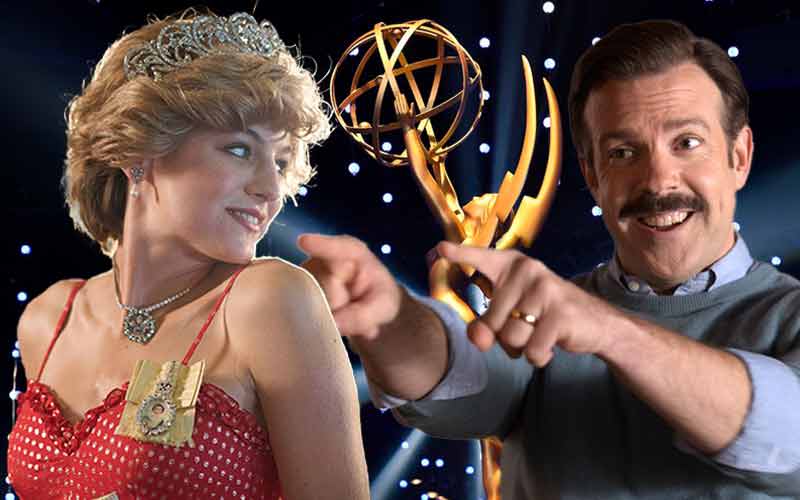 Online sportsbook sites that offer odds for betting on the Emmy Awards posted lines several weeks ago that actually debuted prior to the announcement of the 2021 candidates, but even at that early stage, The Crown and Ted Lasso were already perched atop many of the categories dedicated to the recognition of excellence in the realm of comedy and drama television series.

Legal entertainment betting sites have been fairly consistent in their rankings and moneyline odds offered for each category, however, there are some outliers that vary greatly and can reward gamblers with better value for their online wagering dollar.

For instance, as mentioned before, Ted Lasso is heavily favored to win the Emmy for Best Comedy Series, but if gamblers do their business at Bovada, they can save a few dollars when placing entertainment bets that will generate the same net outcome.

A $10 bet on Ted Lasso’s Emmy odds at Bovada will payout at $1 if it wins, whereas the same one-dollar victory will require a $20 wager at BetOnline.

Line shopping for the best sportsbook payouts will also reward handsomely when betting on The Crown to win the Emmy for Best Drama Series.

As is evident in the table above, Bovada is daring bettors to place some money on The Crown to win at their online sportsbook with that tasty -600 moneyline that separates itself by 1400 points over the nearest book.

Jason Sudeikis is favored heavily to win the Best Actor Emmy for a Comedy Series and his nearest competition only features a minute chance of bagging the trophy. Despite a certain Sudeikis win, there is still 500 points of variance to take advantage of by placing your entertainment prop bets with either MyBookie or Bovada.

The Emmy Awards betting odds are a little tighter when it comes to the lines offered for the Best Lead Actress in a Drama Series, with Emma Corrin of The Crown leading the way.

Entertainment gamblers can risk $2 less for the same outcome by wagering on Emma Corrin’s odds with Bovada, but is there a chance for a movie or television series sweeping the Emmys and propelling some unexpected contenders onto the stage for an acceptance speech?

Potential sleepers for Emmy’s betting that could get rounded up in a sweep are always worth looking out for, and one that has caught our eye is The Crown’s Tobias Menzies who is ranked third with a +700 moneyline in the odds to win Best Supporting Actor in a Drama Series.

If Menzies wins the Emmy, wagers made on him will net $7 for each dollar risked, so he may be worth laying a buck or two on to hedge your Emmy bets this Sunday night.