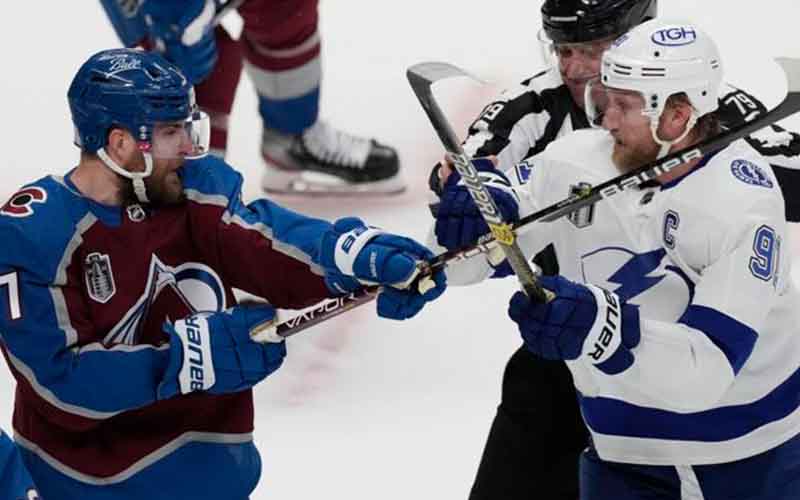 The Tampa Bay Lightning are still alive in their hunt for a Stanley Cup three-peat as they were able to take Game 3 of the Finals against the Colorado Avalanche by a score of 6-2.

Tomorrow night at 8:15 PM on ABC, Game 4 of the 2022 NHL Stanley Cup Finals will begin where Tampa Bay can either pull even or Colorado can establish a dominant lead.

Stanley Cup Finals betting sites have posted the following puck line for Game 4, and while the Avalanche are favored by a slim margin in the spread, the moneyline suggests that NHL oddsmakers aren’t so sure what to make of the Lightning right now.

While the overall moneyline odds to win are set a -110 for both teams, all three betting lines for each period favor Tampa Bay.

Tampa Bay also found themselves down 0-2 against the New York Rangers in the Eastern Conference Finals but were able to reel off the next four games and advance to the championship round.

The Stanley Cup odds at NHL betting sites are always the most profitable when the outcome seems the most unlikely. Unfortunately, that moment would have been prior to the Lightning’s Game 3 win but as you can see below, series prices are still paying out well for Tampa Bay at +250.

The above series prices will change drastically if Tampa Bay wins Game 4 and evens up the 2022 Stanley Cup Finals at 2 games apiece. If the below projections are correct, the Lightning will win at least one more contest and stretch the series to six or more games.

When Will The Stanley Cup Finals End?

Thus far in the NHL Playoffs, once the Lightning figures out their opponents’ strategies and notches one in the win column, it has all been downhill from there.

Should Avalanche bettors be worried? Not yet, but Colorado’s Game 3 loss is only the third time they’ve dropped a game this entire postseason.

The above Stanley Cup prop bet practically dares hockey gamblers to accurately select the exact outcome of the 2022 Finals, and in this case, the Avalanche are favored to win the next two games and secure a championship.

Net profits in the range of $2.20 to $7.30 per dollar can be earned just by betting on the correct Stanley Cup winner and also selecting the game it will occur after.

Online NHL Playoff sportsbooks have favored the Colorado Avalanche to win the 2022 Stanley Cup since before the season began and they are now two victories from accomplishing that feat.