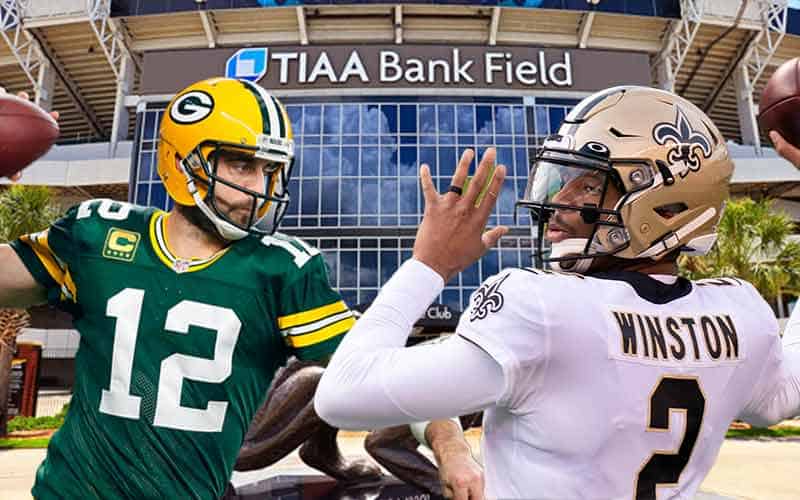 The first game of the 2021-22 NFL Season is still 6 days away and a Week 1 game has already been forced to find a new venue. The Louisiana region is still struggling to recover from the damaging winds and surging Gulf tides cause by Hurricane Ida, and the Mercedez Benz Superdome is unable to open for business in time for the Sants September 12 home opener against the Green Bay Packers.

Because of the current state of uncertainly surrounding the condition of the city of New Orleans, the NFL has decided to move the Week 1 home game of the Saints to Jacksonville’s TIAA Bank Field, which is arguably the nearest and most reasonable venue for local fans to travel to. It works out, as the Jacksonville Jaguars will be on the road playing a 1 PM game against the Houston Texans in what will be a battle of two teams that are expected to be among the bottom dwellers in 2020-21.

Legal online sportsbooks that offer NFL odds have been on their toes for the past 16 months as major athletic events have been rescheduled or outright canceled without notice due to the COVID-19 pandemic. This causes oddsmakers to work overtime to recalculate betting lines, and updated moneylines and point spreads for the Saints and Packers in Week 1 have already been posted.

Generally speaking, home teams granted 2.5 points in their favor toward the spread regardless of the level of football being discussed. If Team A were predicted to defeat Team B at a neutral location by a score of 50-0, if the game were hosted at Team B’s home stadium, the prediction would be closer to 47-0.

By moving the Saints and Packers game from New Orleans to Jacksonville, a neutral location, Green Bay has been granted an extra 1.5 points in the spread. Those that bet on the Green Bay Packers before last weekend earned nearly 2 points of variance in their favor just by laying some action early.

The same can be said for savvy pro football bettors that got in early on the Green Bay  NFL moneyline bets posted before Hurricane Ida for Green Bay, because wagers made today on the Packers require an additional $0.70 to earn a dollar.

Alternatively, if there are any online sports gamblers that believe the Packers are not as good as NFL oddsmakers are projecting them to be and that the Saints are in line to bring Green Bay’s expectations back down to Earth, then it was wise to wait until now to bet on New Orleans’ moneyline.

Since August 6th, the moneyline odds for the New Orleans Saints have risen from +135 to +175, which rewards an extra $40 for each $100 wagered if bets were made a month ago.

While two-thirds of the GB vs. NO game line has been significantly altered, the over/under remains unchanged, and when combining the proposed total with the point spread, the final score calculates to: