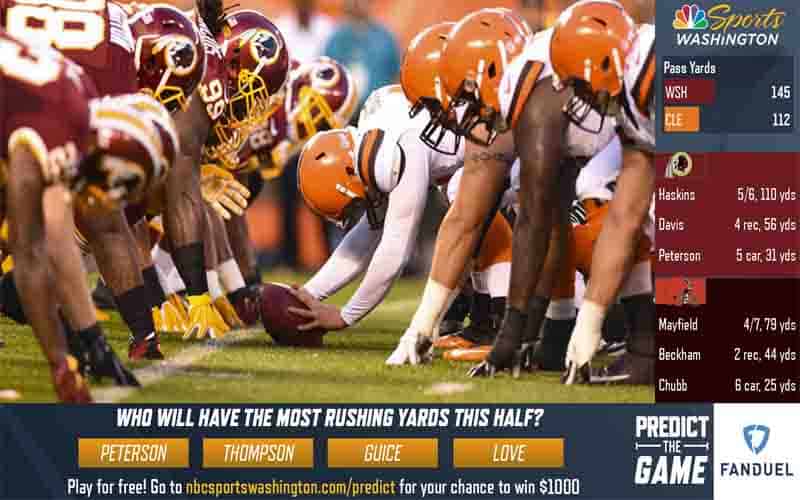 And so it begins.

Tonight’s NFL preseason game between the Washington Redskins and the Cleveland Browns will make history when NBC Sports Washington airs an alternative telecast with sports betting information and a free “Predict the Game” contest.

Fans tuning into the ground-breaking coverage will see questions appear on-screen throughout the game asking viewers to make predictions on what will happen next or how the teams and players will perform in a given time period.

A single game could have up to 80 prediction questions, and viewers will be notified with a chime sound whenever a new question pops up. Answers must be submitted through the NBCSW official website via mobile devices or desktop computers.

“We wanted to figure out a way to do something different and unique for the viewers in DC,” Damon Phillips, NBC Sports Washington’s general manager, told the Sports Business Journal. “This is all about engagement. How do you get someone to enjoy the game even more, and how do we get them to stay longer?”

The sports betting-focused telecast, which will include coverage of point spreads, money lines, and totals as well as a host of statistics, will air on NBC Sports Washington Plus — separate from the game’s main broadcast.

NBCSW has the broadcast rights to all four of the Redskins preseason games and both its sports betting coverage and free “prediction” contest will be implemented for each of the matchups.

The NFL approved Redskins proposal to have a sports betting themed broadcast earlier this week. There are no official plans by NBC to implement the pilot program during the 2019 regular season broadcast, but it’s something the network is considering for the future.

“We are committed to delivering the most engaging experience possible to fans, so the opportunity to partner with the Redskins to combine live NFL action with predictive gaming this preseason is something we are very excited about,” Phillips said.

Philips added that their previous implementation last season with the NBA’s Washington Wizards broadcasts was “a huge success.”

“We realized that viewers want instant gratification, and they also want a lower barrier to entry,” Phillips told the Washington Post. “There’s going to be a higher frequency of questions and we’re introducing a leader board on the screen and on the website, so fans know where they stand at all times.”

While most major professional sports leagues have embraced the evolving sports betting landscape in the 15 months since the repeal of PASPA, the NFL — the most-watched pro league in the United States — has been rather timid to dip its toe into the water.

But more engagement means more ad revenue money, so if the Redskins’ preseason trial run is successful, then it’d be hard to imagine the NFL not getting in on the action sooner rather than later.

And if you want to place a bet on tonight’s Redskins-Browns preseason game, or you just want to see the betting line for the game, that information can be found below.