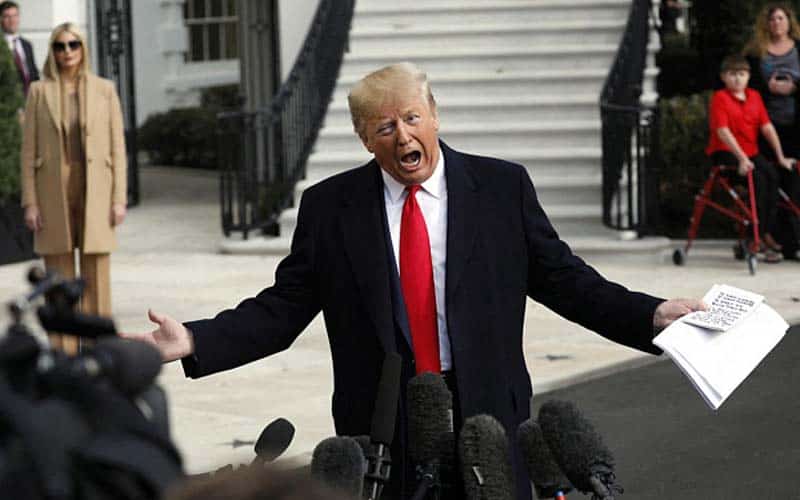 President Donald Trump has had a rough week. After speculation that he was suffering from chest pains or acute issues coupled with damning testimonies against him during the impeachment inquiry, things have not gone according to plan.

To add insult to injury, oddsmakers are now giving the President his best odds at impeachment since the beginning of the entire scandal a few months ago.

As they currently sit, the impeachment chances have skyrocketed from -210 earlier this week to -275 today. When converted to percentages, Trump has over a 70% chance of being impeached during his first term.

There are a few more steps involved before the President can officially be impeached. First, all public testimonies need to be concluded. According to Rep. Raja Krishnamoorthi, a Democrat from Illinois, that is the case following Thursday’s depositions.

Krishnamoorthi went on to detail the second step in the process: sending the reports to the Judiciary Committee.

“My understanding is that we would produce a report to submit to the Judiciary Committee. And then it’s up to them to decide the next steps,” the representative told NBC News.

Once the Committee receives the reports, presumably from Democrats and Republicans, they will decide whether or not to draft the articles of impeachment.

It appears the goal is to have the articles filed before Christmas and a House vote conducted by the end of the year.

If voted to impeach, the trial will move to the Senate to determine if the President will be removed from his post.

Even if Trump is impeached, there is no guarantee he will be removed from office. The only other two Presidents to be impeached– Bill Clinton and Andrew Johnson– were later acquitted in the Senate.

Based on Senate Majority Leader Mitch Mc­Connell’s viewpoint, Trump, like Clinton and Johnson, will also be acquitted.

With the 2020 election just around the corner, Trump could become the first POTUS to be impeached but also reelected for a second term.

The odds back up this historical event. While Bovada favors an impeachment, the political betting odds also list Trump’s chances of reelection the best among all candidates at +130.