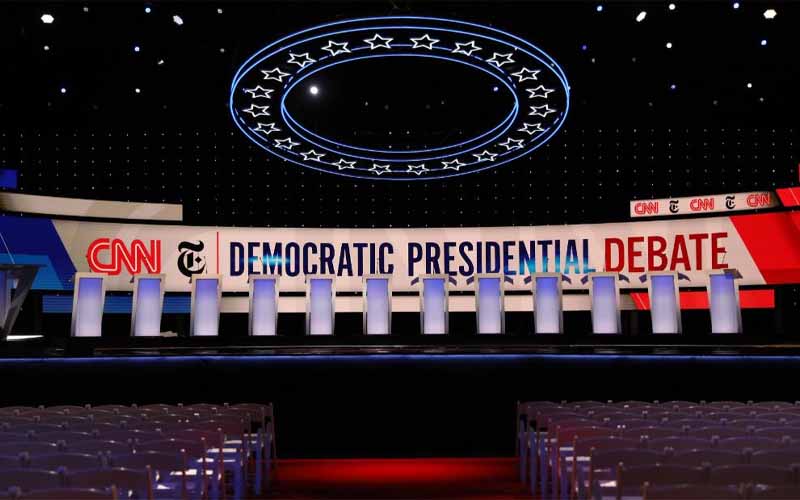 When the 2020 Presidential Election is held next November, anything could happen, especially in a swing state.

And tonight, Ohio—one of the most crucial swing states to win—plays host to the fourth Democratic debate.

Held just north of Columbus at Otterbein University in Westerville, the October 15 debate will be at 8 pm ET. Hosted by CNN and The New York Times, Anderson Cooper, Erin Burnett, and Marc Lacey will moderate. The debate can be watched on CNN, CNN International, and CNN en Español.

Tonight’s debate will feature 12 presidential hopefuls on one stage. Although they did not qualify for the third debate, Rep. Tulsi Gabbard and billionaire activist Tom Steyer were able to reach the Democratic National Committee thresholds for this debate.

As is the tradition for political betting sites heading into the debates, BetOnline has released odds for several political proposition bets covering everything from talking points, to China, to Dwayne “The Rock” Johnson.

One of the most important prop bets for any debate is which topic will receive the most talking time during the event.

According to oddsmakers, health care is projected to earn the most debate time tonight at +200 odds. However, despite only having +500 odds, foreign policy could come up often during the debate due to the protests in China and President Trump’s controversial decision to withdraw troops from Northern Syria.

When it comes to who will get the most individual speaking time tonight, Biden and Warren are favorite with +200 odds.

As he will be making his debate premiere tonight, Steyer could look to talk frequently despite his odds only being +1200.

Who will receive the most speaking time during the debate?

While the debate stage is important, the Twittersphere could be the biggest platform during the 2020 election. Similar to the talk-time odds, Biden and Warren are projected to be the most tweeted about candidates tonight at +200.

Yang is close by with +500 odds, likely due to his strong #YangGang online presence.

Who will be tweeted about the most during the debate?

As the Democrats debating tonight are all vying for a chance to defeat Trump in the upcoming presidential election, it is likely that the incumbent’s current controversy may come up.

After a whistleblower filed a complaint regarding a phone call between Trump and Ukrainian President Volodymyr Zelensky, followed by Trump’s public request asking China to investigate the Bidens, an impeachment inquiry was launched.

Due to the inquiry, “impeach,” “China,” and “Ukraine” are all bound to come up throughout the night.

How many times will “impeach” be said?

How many times will “Ukraine” be said?

China’s total is much higher, due to the impeachment inquiry and the current Hong Kong-China protests. Expect to hear China mentioned often, especially with an over/under at 49.5 times.

How many times will “China” be said?

Speaking of speaking, there are quite a few prop bets centered on what the candidates might say tonight.

Another speech over/under is how many times “billionaire” will be said by any candidate. This keyword has threefold importance.

Finally, as Democrats usually target middle- and lower-class communities, exposing billionaires for their exploitations is common during the debates.

The billionaire over/under is 9.5 times with -120 odds for both.

How many times will “billionaire” be said?

Particularly a favorite key phrase of Trump, “fake news” is favored to not appear tonight during the debate at -150 odds.

Will “fake news” be said by any candidate?

Hunter Biden, on the other hand, is expected to be mentioned. The son of Joe Biden, Hunter is the center of Trump’s corruption focus on the family. At -200 odds, questions about Hunter are likely for his father on stage.

Will “Hunter Biden” be said by any candidate?

Although the National Basketball Association is tangled in a power struggle with China following tweets made by Houston Rockets GM Daryl Morey, the league is projected to be left out of the Democratic debate with -150 odds.

Will “NBA” be said by any candidate?

There are also a couple of prop bets that focus on an individual candidate’s word usage.

Warren is expected to mention Facebook tonight at -250 odds, likely due to FB CEO Mark Zuckerberg’s comments hinting legal action against Warren if she were to try to break up the social media giant.

Warren is also projected to mention The Rock at -200 odds after Dwayne Johnson called the Democratic frontrunner a “baller.”

Will Warren say “The Rock”?

As President Barack Obama’s Vice President between 2008 and 2016, Biden was an important player in some of the country’s biggest moves during those eight years.

However, Biden has been criticized multiple times because of his overuse of Obama’s name in his campaign. Tonight, the Obamameter is set at 3.5 total Obama mentions by Biden.

How many times will Biden say “Obama”?

Biden frequently uses his time under Obama as one of his platforms, but Yang has a different kicker: his Freedom Dividend.

A universal basic income totaling $1,000 per month, Yang’s campaign is built on the idea. Nevertheless, the over/under for “thousand dollars” is only set at 1.5 total times.

How many times will Yang say “thousand dollars”?

Last month during the third debate, Yang announced he would be giving away his Freedom Dividend to 10 families as a year-long pilot program.

For the fourth debate tonight, Yang is favored to do another giveaway at -150 odds.

Will Yang announce another giveaway?

Following his recent heart attack and subsequent surgery, many are wondering if Sanders is just too old to continue running for president.

Even if Sanders does decide to withdraw from the race, is it not expected to happen tonight on the debate stage. At -10000 odds, Sander’s continuation is heavily favored.

Will Sanders withdraw his candidacy on stage?

Another unlikely occurrence is a Democratic candidate endorsing an opponent on stage tonight. Odds say that it’s a longshot at -1000 chances.

Will any candidate endorse another for President?

Before the last debate in September, the DNC asked the candidates to stop cursing during the debates. It is likely that request carries over to the debate tonight as the chances of a candidate getting bleeped at -300.

The prop bets also include a speech wager independent of the candidates. BetOnline predicts that a protester will interrupt this debate at -200 odds. Protests momentarily halted the September debate, and with the current Hong Kong protests, it is likely to carry over.

The rest of the prop bets pertain to The Hill-HarrisX Daily Poll percentages for Biden, Warren, Sanders, Harris, Buttigieg, O’Rourke, and Yang on Friday, October 18.

The candidates current polling percentages are as follows: