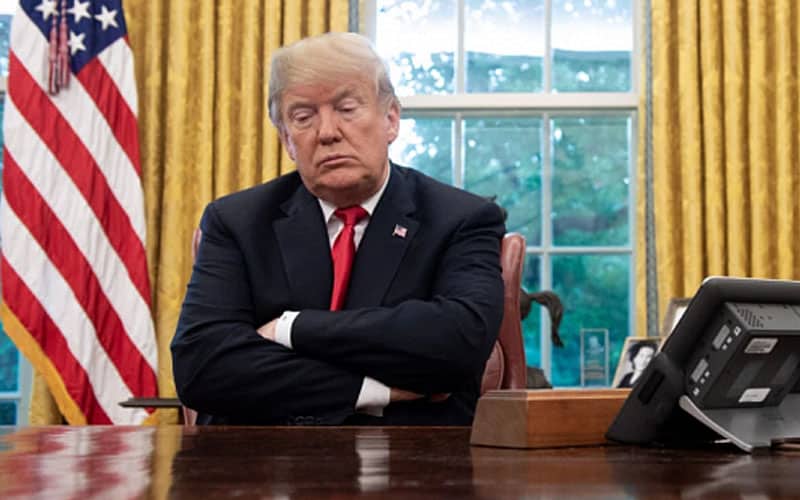 Just last week, the odds heavily favored President Donald Trump avoiding impeachment at -500 odds. Simply speaking, there was an 83.33% chance that Trump would not be impeached.

There has been a complete 180 since then.

Based on the political betting odds released by Bovada today, Trump now has -150 odds of being impeached during his first term, equating to a 60% chance.

Will Trump be impeached in his first term?

An official impeached inquiry was launched by House Speaker Nancy Pelosi on September 24 following the August 12 complaint filed by a White House whistleblower alleging that Trump threatened to withhold military aid from Ukraine if President Volodymyr Zelensky did not investigate Joe and Hunter Biden.

Following these events, Trump’s impeachment odds still favored that he would remain in office throughout his first term.

However, after an appeal to China, Trump may have caused his odds to drop on his own.

Speaking to White House reporters yesterday, not only did Trump publicly double-down on his idea that Ukraine should investigate the Bidens, but he also suggested that China do the same.

“China should start an investigation into the Bidens because what happened in China is just about as bad as what happened with Ukraine,” Trump said. “I haven’t [asked Chinese President Xi Jinping] but clearly it’s something we should start thinking about.”

Not only has Trump asked another foreign power to investigate his political rival, the same thing that originally launched the impeachment inquiry, but he has asked a country that is currently in a trade war with the United States.

Trump has defended his position on Twitter, claiming that it is his obligation to end corruption, even if the help of foreign powers is needed.

As President I have an obligation to end CORRUPTION, even if that means requesting the help of a foreign country or countries. It is done all the time. This has NOTHING to do with politics or a political campaign against the Bidens. This does have to do with their corruption!

Trump’s actions have upset many Democrats, but now even more Republicans are voicing their displeasure with the President. Mitt Romney, former presidential candidate and current Senator for Utah, tweeted that Trump’s “brazen and unprecedented appeal to China and to Ukraine to investigate Joe Biden is wrong and appalling.”

By all appearances, the President’s brazen and unprecedented appeal to China and to Ukraine to investigate Joe Biden is wrong and appalling.

Former South Carolina Gov. Mark Sanford, who has launched a Republican presidential campaign and is running against Trump in 2020, believes the party has lost its way since 2016.

“The Republican Party has lost its way under this administration — not just on debt and deficit but frankly with regard to are we inward- or we outward-looking,” Sanford told The Hill.

Despite the increased chances that he is impeached and a growing number of Republicans condemning his actions, Trump still has the best odds to win the 2020 election.