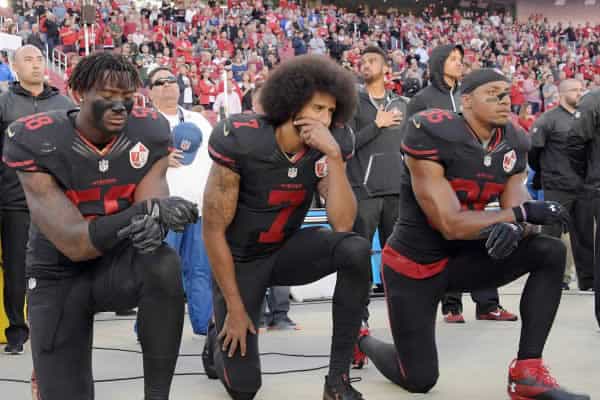 The news was met with harsh criticism that centered on whether or not this decision infringed on players’ rights as US citizens. This news also spurred some football player prop bets with various lines at NFL sportsbooks focusing on public opinion and the potential outcome of the rules.

The Constitution states that we have the right to free speech and peaceful protests. NFL players who choose to kneel during the National Anthem are doing so in order to spotlight racial inequality in America, specifically towards people of color. The kneeling drew a lot of flak from conservatives that said they were disrespecting the flag, what soldiers fought for, etc. Those who supported kneeling argued that soldiers fought for the very freedom that allows these citizens to protest. As you can see, the issue becomes controversial.

This policy change seems like the NFL trying to remove itself from the equation by eliminating players’ ability to do anything in front of the cameras. The NFL should’ve left the issue alone. Most broadcasts excluded the National Anthem already since people were tired of seeing players kneeling and everyone seemed to forget about it. Now, the league has dug this issue back up and shined an even brighter light on it.

To the point of whether this decision violates players’ rights, we believe it does. The NFL is a private corporation and as such can implement policies of their own, but this decision seeps into the realm of constitutional rights and there could very well be grounds for a legal appeal from the NFL Players Association. The fact that players can be fined by the league and their teams adds fuel to the dumpster fire that this kneeling issue has become.

Furthermore, all this controversy takes away from the original point of the protest. Some NFL personnel and officials have applauded the players voicing their concerns through kneeling. Several owners have distanced themselves from the decision and have even gone as far to promise to pay all fines issued to players that kneel.

One thing is certain, this kneeling issue is not going away anytime soon. If anything, the NFL dug itself in an even deeper hole by trying to strongarm players into appeasing their agenda. Players will find alternative ways to protest, and you can bet it will be on camera. These players have millions of dollars, so fines really won’t be a problem.

Increasing fines will look worse on the NFL’s part. So, the NFL has put itself in a conundrum that it doesn’t seem to know how to solve. If this ends up going to some sort of legal battle, the NFL is looking at a PR nightmare. The NFL may not have thought this would blow up in such a way, but they pushed themselves into the thick of it.