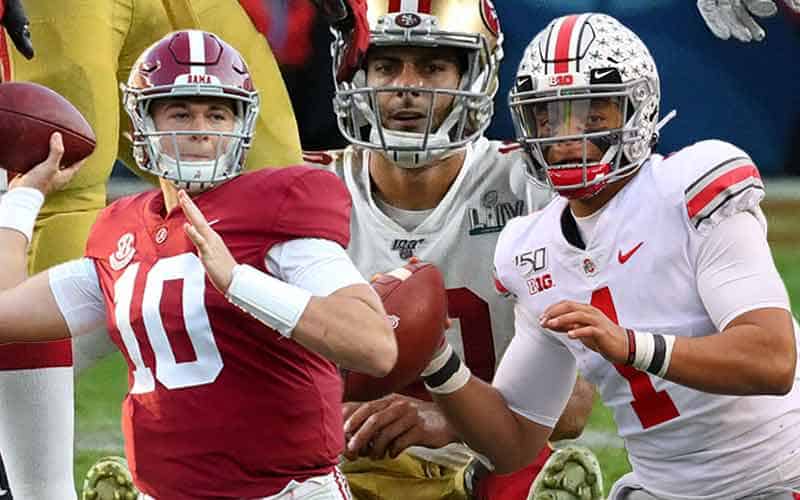 The 2021 NFL Draft features loads of high-end talent from the ranks of college football, with many franchises expecting to make selections at the top of the first round that will significantly alter their immediate and distant future.

Online NFL Draft sportsbooks were hesitant to release betting lines for this year’s selections, but now that we’ve entered the week of the event, the options are overflowing and offer many different ways to lay some action.

Part of the rationale for that hesitancy is the almost near certainty that the first overall pick would be Clemson’s Trevor Lawrence, who will become the new quarterback and leader of the offense for the Jacksonville Jaguars on Thursday evening.

This certainty inhibited NFL betting sites from producing odds based on the first overall pick, and the glut of offseason trades among pro football franchises has muddied the waters a bit.

There are persisting rumors that teams are still vying to trade for the #6 pick from the Miami Dolphins, but because the draft is only three days away now, NFL prop bets have populated the boards with massive money-making opportunities.

There is a line for the #1 overall pick, but Trevor Lawrence’s astronomical -100000 odds equal a near-certain probability, and the max bet at Bovada of $10,000 will only warrant a $10 win.

Sportsbooks are either offering this line simply for the sake of including odds on the first overall pick of the NFL Draft and to potentially inspire action on the profit potential of an underdog.

The real intrigue begins once the clock begins ticking on the San Francisco 49ers and their third overall selection of the first round.

When the 49ers traded with the Dolphins for the #3 spot this spring, early projections suggested that they would select Ohio State QB Justin Fields.

Now it appears that San Francisco is leaning toward selecting Alabama quarterback Mac Jones, but the odds are tight for the first three options on the board.

Fields is considered to be the more athletic option, with Jones being in line with more traditional drop-back passers.

Shanahan has utilized Matt Ryan and Jimmy Garoppolo under center in recent years, so oddsmakers are likely using that as rationale for the selection of Jones.

On the other side of the coin, the league has been slowly transitioning toward more athletic quarterback play, and thus, Shanahan could be looking to spice up his offensive scheme will a little extra mobility from his signal-caller.

Don’t forget to tune into the 2021 NFL Draft this Thursday night at 8 PM on ESPN and NFL Network for coverage of every pick made in the first round.